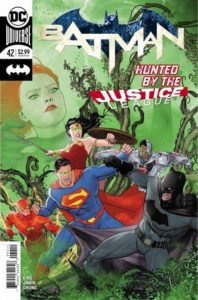 Poison Ivy has taken control of the world and has Superman man watching over Batman and Catwoman’s every move.

The best thing about Tom King’s writing is that the reader is almost always rewarded by the end. The issue kicks off with what feels like a horror movie, with a brainwashed Superman looming over Wayne Manor. How Batman is able to scape his site was clever and I loved the little explanation for why the real Clark would never fall for it. It was such an odd beginning but like with most of King’s work it will be explained by the end of the issue, you just have to enjoy the ride. And that’s exactly what I did, for the most part.

I’m trying not to be the prototypical fanboy who complains about every minor problem with canon or character power levels. But I admit, it bothered me seeing Catwoman dispatch superheroes with such ease. Sure, they’re brainwashed and therefore not their true selves, but Selina should probably not be able to move at superhuman speeds. Or maybe I’m just being a hypocrite because if it were Batman taking down the Justice League I’d be cheering him on. Nah, I’d probably still be upset.

As Batman’s mysterious counter-plan unfolds, it looks like there is more to Ivy’s recent descent into villainy. I was surprised to see Tom King like the tweet that contained our Batman #41 review. I had loved what he did but I did bring up the passionate Poison Ivy fanbase, something I thought was a touchy subject but I may be wrong about that. I don’t always agree with them but I respect them, though I wish they’d be more understanding about the various takes on the character. King was on the receiving end of a few upset messages the last time he wrote her in the “War of Jokes & Riddles.” And without giving too much away, her actions in that story arc were referenced in the latest issue, with Pamela questioning her own motives. Maybe this story was planned a long time ago, but it appears to be a writer tackling criticism head-on. It makes where he’s going with this story all the more unpredictable. 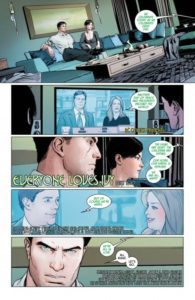 Mikel Janin really brought the horror vibe with his artwork in this issue. Not just the way Superman hovered around, but also my favorite panel that showed Batman after getting punched in the face. It was brutal looking, as it should be. Janin can even make something so horrific beautiful. Props should be given to June Chung’s colors for adding to the creepiness in the issue. It really brought everything together.

A lot went on, which was a flip from the previous issue. It was intense and suspenseful the whole way through. I don’t think enough could be said about the art. Just because Mikel Janin is consistently brilliant doesn’t mean we should take it for granted. There was a lot to love in Batman #42.