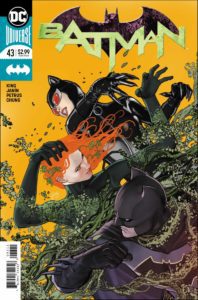 Poison Ivy has control over the world except for Batman and Catwoman. She struggles to live with sins from her past.

Tom King has tackled online criticism from a previous story arc so well that if you told me he had planned this conclusion all along, I’d believe you. During a recent Batman story arc titled The War of Jokes and Riddles, a few passionate Poison Ivy fans voiced their disappointment over their favorite character being shown as a cold-blooded murderer. Justifiably so considering the storyline took place in the past when Pamela was still a villain, but their frustration stems from the character’s ever-changing moral compass. In this current story, King pulls off what he does best, and that’s delving into the psyche of anyone he writes and developing a more nuanced character. It has made me all the more interested in what comes next for the Batman rogue.

There are a few things about the past few issues that bother me, including the Flash-like reflexes of Catwoman, and Pamela almost killing Batman by controlling Superman. Also, the ending to this issue was a bit anti-climactic, though I never expected a big showdown given the antagonist being reformed. But the more I think about the ending the more I like it because it feels like Bruce and Selina are attempting to save a friend and show her compassion, rather than two good guys beating down a baddie. Under the surface of what appeared to be a villain trying to dominate the planet, there was pain and regret. 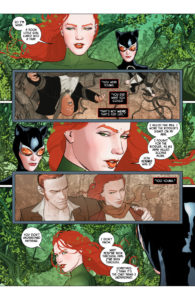 I had only skimmed the credits the first time I read this issue, but I was surprised to see two artists listed. Mikel Janin has such unique pencils and yet Hugo Petrus’ artwork was able to blend in well for the few pages he worked on. Janin, of course, is a master and did amazing work. The splash page that followed Selina and Pamela was lovely. There is something about the way he draws Poison Ivy that makes the character really pop off the page. June Chung’s colors have a lot to do with that as well.

There was a lot to be intrigued by in this arc, and even though the finish wasn’t perfect, I’m happy where this story went. There were many layers to it and wasn’t simply tied to redeeming Poison Ivy. As a supporter of the Ivy/Harley “ship,” this issue was not shy about the presumed romantic relationship between the two. I am curious to see what others thought about Batman’s implication. Great character work, beautiful artwork, and a conclusion that treaded outside the norm. This final issue made me appreciate the current run even more.