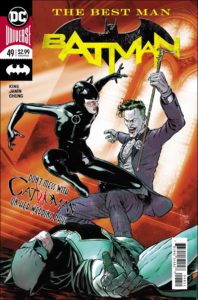 Batman has been paralyzed so it’s up to Catwoman to fight off The Joker.

This has been one of the most surreal Batman story arcs I’ve ever read. The characters come off so casual and candid in this story that it almost feels like a parody at times, similar to Tom King’s other work on Mister Miracle and Vision. It can be offputting at but it can also be mysterious and exciting, so I’m willing to take the good with the bad because King is incredibly talented and his take on the Dark Knight is fresh and different. This particular issue suffers from the same problems as the last in that nothing happens, but the ending is so intriguing that it did have me looking at the past issues in a completely different way. I’m really looking forward to the wedding now.

Mikel Janín’s art and June Chung’s colors were fantastic as always. They did do something different in the action panels that I don’t recall showing up in the previous issues. I think all of the Catwoman Joker fighting panels had plain white backgrounds and sometimes utilized small boxes that zoom in on something of significance. Every character has looked like a million bucks in this story arc. Such lovely artwork.

The back and forth between the two iconic villains was oddly casual, but that ending took me by surprise. I’m not really sure what to make of it and I couldn’t possibly guess without spoiling the moment. My mind instantly went to a twist from Batman Beyond, which would be quite disturbing. But it has sold me on the upcoming wedding. Between this arc and the wedding tie-ins, there is a lot of familiarizing the readers with Batman rogues going on. I am curious as to how this all ties into the wedding which I doubt will go perfectly. I truly am looking forward to it. Though the overall story wasn’t as satisfying as one might expect a Batman/Joker showdown to be, there seems to be more going on and I expect this issue to mean a lot more once the whole story is out.

Gorgeous artwork and a final page with plenty of mystery to mull over. This issue was weird at times but has more to offer than meets the eye. Stories like this are what make reviewing single issues so difficult because we clearly don’t have the full scope of things going on just yet. I didn’t love this story arc, but there is a lot to like about this comic book.