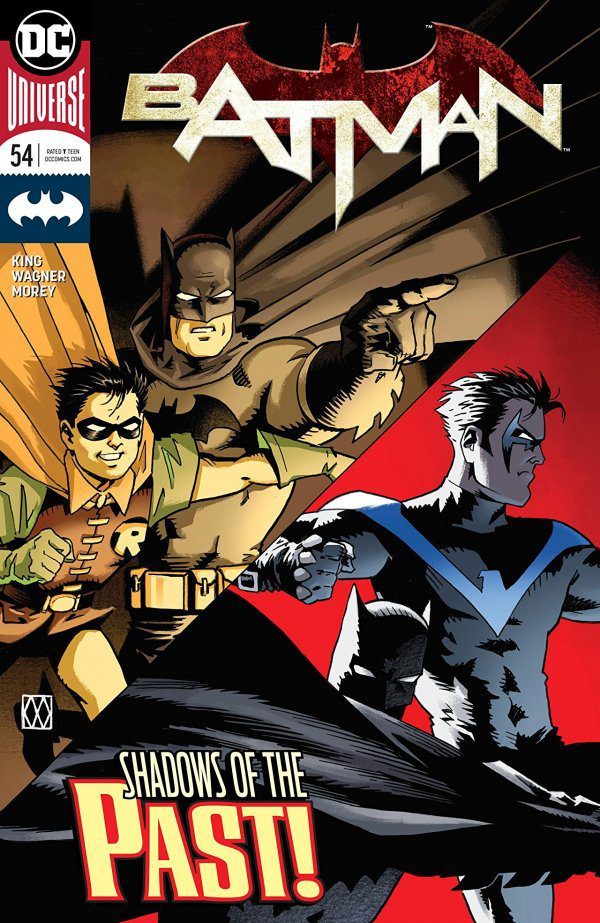 Bruce has returned from his brief stint as a juror in Mister Freeze’s murder case, and Dick Grayson is no longer needed to be Batman. But Nightwing decides to stick around Gotham City to help the man who took him in as an orphan, get through the pain of being left at the altar.

Due to some behind the scenes dealings, not much information was given out about this issue prior to its release. All we knew going into it was that it dealt with the father-son relationship between Bruce and Dick. The extra wrinkle in the story is the theme of learning to let others help you deal with emotional pains. After all the unnecessary fights, reboots, and drama between the two, it’s nice to finally see Batman and Nightwing be there for each other. Before the Catwoman debacle, both characters were in a good headspace mentally, so it made no sense for there to be so much tension between them when they met. In many ways, Batman #54 was the comic book I’ve been waiting years for, but it still had some problems that left me underwhelmed.

Tom King once again, cuts deeper into Batman than any writer ever has before him. Going back and forth between flashbacks of Dick dealing with the death of his parents, and he present where Bruce is clearly struggling, was a surprisingly emotional issue. King touches on things that I would never have expected DC to allow him to write. Seeing cracks in the Dark Knight’s facade has made this run all the more powerful.

Matt Wagner is an incredibly talented artist that has the perfect nostalgia driven style to tell a Nightwing story. The pencils and the colors were bright and chipper, almost wholesome. I just don’t think he was right for this issue and this run. Batman does something I don’t think I’ve ever seen him do before, and yet those panels didn’t resonate with me till a second and third look through. It should have been devastating, but I didn’t feel the artwork captured the moment well enough. Which is a shame because flashbacks looked amazing and emotional beats that featured a young Dick Grayson did hit for me. Something just didn’t click for me with this issue when it came to the art.

This issue will probably be brought up by Batman and Nightwing/Robin fans for years to come. It encapsulates everything their relationship should be at this point in their lives. Tom King seems to be getting better and better at deconstructing Batman as a human being. The art was good but I would have liked to see Tony Daniel or Mikel Janin’s take on this issue. That and the abrupt ending took some of the wind out of its sails. But this was still a beautiful issue that deserves multiple read-throughs. Everything seems to be setting up another confrontation with Bane, but in many ways, Bruce Wayne is already broken. Tom King, on the other hand, seems to just be getting started, and I can’t wait to see what comes next.