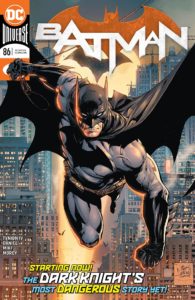 Batman #86 marks a brand new chapter in the Dark Knight’s tale, following the conclusion of Tom King’s huge “City of Bane” arc, with James Tynion IV and Tony Daniel taking the helm. Teasing an “action horror book driven by exciting mystery…including new vehicles to redefined key locations, and your favorite Gotham villains”, Tynion IV definitely has me excited for this title, but with big shoes to fill – will it live up to the hype?

Following the monumental events of “City of Bane”, Batman and Catwoman seek to heal their city, picking up the pieces in the wake of Thomas Wayne and Bane’s twisted control. However the Bat and the Cat aren’t the only ones with a plan for Gotham City, as Deathstroke and a rag tag band of assassins are hired under a mysterious contract. But who’s pulling the strings of these puppets, and just what are their designs for the city?

In just twenty three pages, James Tynion IV and Tony Daniel have me hooked. There’s a new vehicle, fan favourite villains with the return of Deathstroke, Teen Titans assassin Cheshire and Green Arrow’s longtime enemy Merlyn, along with a killer of an epilogue! I love how the new creative team have woven just enough of the aftermath of King’s run into the issue, whilst also establishing a brand new mystery – paving the way with a bolder and darker edge. Clearly the recent events have weighed heavily on Bruce, particularly with the loss of Alfred, which Tynion IV tragically reminds us of. But with the shocking discovery of a new plan for the city, I fear that the World’s Greatest Detective battles are far from over.

The fantastic creative team have definitely brought a more atmospheric vibe to the issue, with a rain soaked Batman and Deathstroke facing off in an explosive and highly kinetic showdown. The muted tones of Gotham city really make the orange of Deathstroke’s suit and green of the deadly gas vibrant and pop, with an intriguing horror influence.

Batman #86 is a well-paced, thrilling opener that establishes a sinister yet intriguing mystery, along with an exciting clash between hero and villain. I know that I’ll definitely be picking up the next issue!