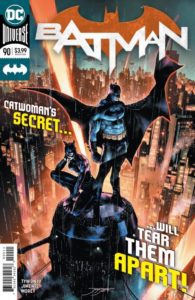 Things begin to unravel for the caped crusader and what the Designer has in store for him. Catwoman reveals what transpired many years ago in the secret meeting with The Joker, The Penguin, and The Riddler. As she divulges the story, we find out that this plan has been in the works for many years. However, we don’t know the true extent of it as The Designer is always going to be steps ahead of the Dark Knight.

Coming off of the massive speculative buzz for the last issue, it was refreshing to see the story keep on track. Finally getting to see the story unravel and how much The Designer had been planning these events is a great foil for the Caped Crusader. As of now the main target seems to be the four villains but we never know, as it seems like a twist is in the making.

Tynion has been able to grow into the story. This issue was able to show us his ability to build a new character and include him seamlessly into the Gotham landscape. The hype surrounding Punchline didn’t affect the overall quality of this issue or story arch. The only downside was the pacing; which felt too quick and rushed.

The art has many ups and downs. It’s not a badly drawn issue as we see some classic villain costumes. Jimenez does a good job with character profiles and handling the secret meeting. He just seemed to focus on getting as many panels with poses for potential statues. This mixture quickens the pace and forces you to back track to enjoy some of those panels.

Batman #90 isn’t a bad read and we do get the origin of The Designer. The major flaw in the book was how fast the pacing was. Most of the time this isn’t a problem, but given that in this issue we learn more about why it is all happening, it shouldn’t be rushed. It felt as if The Designer was added to offset Punchline and calm the demands for her. Outside of pacing and too many statue poses it is a solid entry.

Batman Catwoman The Riddler
Add your voice!Join the conversation on Discord...
Join Our Discord