Batman and the Outsiders #11 (REVIEW) 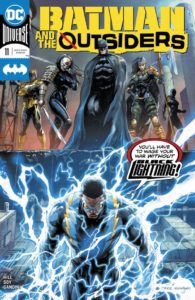 Batman and the Outsiders #11
DC Comics

(WARNING: Spoilers for Batman and the Outsiders #11 ahead.)

There are a couple major moments in Batman and the Outsiders #11 regarding the story, but Dexter Soy’s artwork truly takes over the issue.

Every moment of the fight between the Outsiders and Ra’s al Ghul’s band of assassins is nonstop excitement. Orphan, in particular, dominated the battle, alongside Signal. And Ishmael couldn’t look more badass with his dueling sickles.

Having said that, the most impressive image has to be Ra’s’ arrival at Markovia. Even someone who knows nothing of the Batman and the Outsiders story or even the slightest detail about Ra’s al Ghul could figure out this man is set to impose his will on the masses.

But now The Demon’s Head has a new adversary: Lady Shiva. Truthfully, there’s no way Batman and the Outsiders can lose now. Batman, Lady Shiva and Orphan on the same team is lethal enough, combine them with Babylon and the rest of the group and it’s game over.

Though, there are some who could still pose a threat and push this group to the limit, and Ra’s’ is certainly one of them.