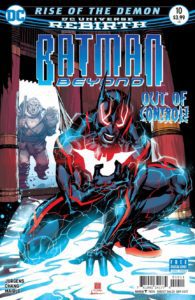 Damian Wayne and Terry McGinnis duke it out while Bruce tries to stop his two protégés from killing each other.

One of the more impressive feats this issue accomplishes is keeping close to the history of each character. The callbacks to Damian Wayne’s past and events that occurred in the Batman Beyond timeline all find their way into this story. Unlike previous Batman Beyond stories, this actually feels like an altercation that would occur in the future of the current DC Universe.

The question of why Damian Wayne would become the next Ra’s al Ghul has been answered, and that answer is: just because. His reasoning for abandoning his father to join Ra’s feels so empty that I am only left to believe that he isn’t telling the truth. Dan Jurgens does a great job of making Damian feel like a big threat. He wipes the floor with Terry McGinnis without the help of a super bat-suit. The way he carries himself is very reminiscent of his grandfather. If he becomes the big bad villain that Terry has to deal with in future issues, he is a worthy one. The only problem I can find is the character’s motivation. 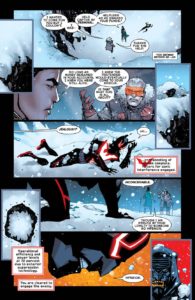 Terry took a backseat this whole issue and doesn’t look all that impressive, and by the end of the issue he just comes off as just cruel. The dynamic between him and the bat-suit AI is clearly being setup and it could lead to something really fresh for Batman Beyond as a series. As a reader, you keep waiting for Batman to finally snap. This whole situation really does feel like two sons fighting over their father’s affection. Between the suit and the family drama, this has all been a compelling read.

Bernard Chang can do no wrong; his characters and action sequences are always spot on and wonderful. The layouts were great, especially the splash page that has Damian preparing to stab Terry with his sword. Credit to whoever placed the word boxes in that scene because it was easy to follow the conversation along while it wraps around the flashbacks. It almost feels like the Batman Beyond art team is underrated, they continue to turn out great work every month but its other Bat-books that receive the praise.

Overall, was a great issue that featured a ton of great action. But for fans of Robin, it might be bittersweet. No one likes to see one of their favorite heroes turn heel, but this has been great story arc so far. Damian Wayne is portrayed as an absolute beast.