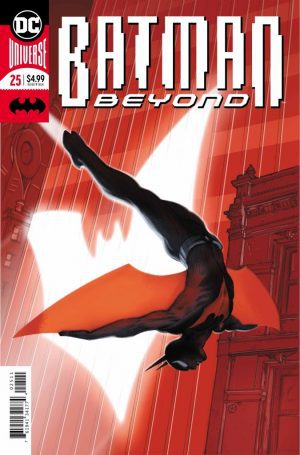 We kind suspected what the end-reveal would be, but it was still amazing to see the Joker back in the mix. These next few issues of Batman Beyond could turn into must-reads if done right (if you don’t consider it one already).

My only concern with how Dan Jurgens handles things: will the fight be more about Bruce Wayne v. the Joker or Terry McGinnis v. the Joker? I want the latter. I don’t need an intense battle of wits between Bruce and the Joker. We’ve already seen those two go blow for blow play of times.

I want to see how McGinnis handles himself. This could be where he becomes Batman on his own. It’d be interesting if he was forced to protect his brother against the most unpredictable minds ever. Would he succeed or will Matt turn into Jason Todd? (Who came up in the course of Dick Grayson’s flashbacks.)

For what it’s worth, whoever drew Red Hood in is normal outfit between Cully Hamner or Marco Santucci did very well. Based on where Batman was in that flashback, you’d think this means Red Hood will eventually go back to his old look.

We also see Dick Grayson is much more like his old self. Far from his new persona, Ric Grayson, that he’s adopted in the current Nightwing arc.

We also got another shot of the Demon’s Head, also known as Damian Wayne.

It’d be great if the return of the Joker brought the entire family back together. Maybe Damian could finally go all out against the Joker.

Going back to Hamner and Santucci’s art, I really like the spread where Bruce approaches the microphone and we see all the crucial characters from Batman’s past. (Though, I don’t think Tim Drake made the cut, yet somehow Matt McGinnis did. Not cool.)

Batman Beyond has been going strong for a while, but it really has a chance to turn a corner with the Joker coming into play. Very excited to see what Jurgens has in store next.