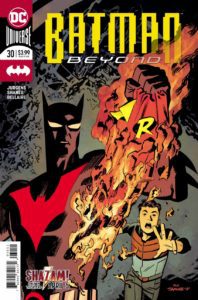 For a second there it really felt like the Joker was back, again. The only thing worse than Dan Jurgens killing him via a heart attack would have been faking it and somehow having him come back to life instantly.

That was not the case in Batman Beyond #30. No, instead, Matt McGinnis is having nightmares about his experience with the Joker. Who wouldn’t have nightmares after that mess? Especially as a kid his age.

But Matt still wants in on the fight. Now, he’s a kid. Kids make irresponsible decisions all the time. That’s what adults are for. Yet Bruce Wayne thinks it’s a good idea for this kid to stay involved in the fight. A kid with limited training that’s clearly still traumatized from a run-in with one of the most dangerous criminals of all time. Meh, what’s the big deal?

“Get thrown from a horse and the only recourse is to climb back and ride,” was his response to Dick Grayson questioning on the matter.

Look, Bruce, that saying applies to a lot of things in life. Fighting crime probably isn’t one of them — especially in Matt’s case.

Batman Beyond #30 ends with a familiar face stick her nose where she shouldn’t, teasing the idea that another character could return, again. Hopefully, Jurgens doesn’t walk down that path too soon.