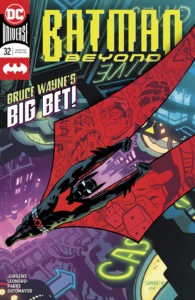 In case you forgot how valuable Bruce Wayne’s experience above all else, Batman Beyond #32 was an effective reminder. Even with all of his fighting abilities and gadgets he had through the years, his brain was always his greatest weapon.

Not that this notion isn’t always at the forefront, it’s just, well, more amplified by Terry McGinnis’ actions this issue. He’s unable to get himself out of the jam he found himself in at the end of Batman Beyond #31. Without help from his brother Matt, he’d be dead. On top of that, he decides to throw himself back in the battle while turning down a helping hand.

Youth can be a great asset when it comes to being Batman. But the job requires a lot more than peak physical condition alone.

(Major spoilers ahead if you haven’t finished Batman Beyond #32.)

Firstly, Terry electing to go alone against Splitt when Melanie Walker was ready to suit up as 10 was beyond stupid. Splitt took him to town in Batman Beyond #31. Because he fought Splitt once he assumed he had things figured out. Clearly, he was proven wrong when it turned out the villain was a speedster, not a teleporter.

Second, Matt may only be a kid, but he seems to be as perceptive as anyone. When Bruce said, “I’m gonna catch me some Z’s,” every alarm should’ve been going off in his head. Bruce Wayne would never talk like that. This is coming off Bruce essentially giving up on Terry while he was on his deathbed in the gravity generator. He may not always have the answers, but Bruce always has a few ideas on how to approach any issue. Matt figured out a possible resolution fairly quickly, and it worked. Matt knew something was off, but he should’ve known it was more serious than the way he actually perceived it.

Which brings things to the last point: we’re dealing with False Face while Bruce is stuck at Arkham Asylum. We haven’t seen Bruce’s face in the prison yet, but Dan Jurgens made it fairly clear as to what’s going on. While the stuff with Splitt has been good, A Bruce Wayne-False Face switcheroo has the making of an intense chapter.