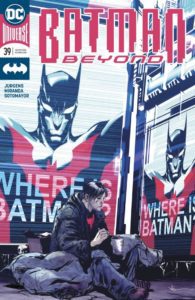 The big thing that stands out most about her interpretation in Batman Beyond #39 is she does the head perfectly. The eyes are a perfect size, and Batwoman still has that harsh jawline Batman has — as opposed to a slightly softer look female characters are given.

The jawline is especially important because that makes it much easier to buy into the mystery Dan Jurgens has presented us with: Who is Batwoman?

(WARNING: Spoilers ahead for Batman Beyond #39.)

Batwoman’s identity seemed a bit obvious at first, but now it’s become harder to tell who this new hero really is. The red hair being part of the helmet was a nice touch.

Unless Jurgens intends to bring in someone who we haven’t met or seen in a while, my money is still on Melanie Walker.

My favorite decision by Jurgens in all of this is how he’s going to bring Terry back in the fray. Running into Constance with Blight popping is a bit convenient, given her background. But it’s also creative. Terry’s trail has run cold for Bruce and Matt. They need a little bit of luck if they’re ever going to find him.

Though, Terry running into Blight — especially without the Batsuit or any knowledge of his true identity — isn’t exactly “lucky.”