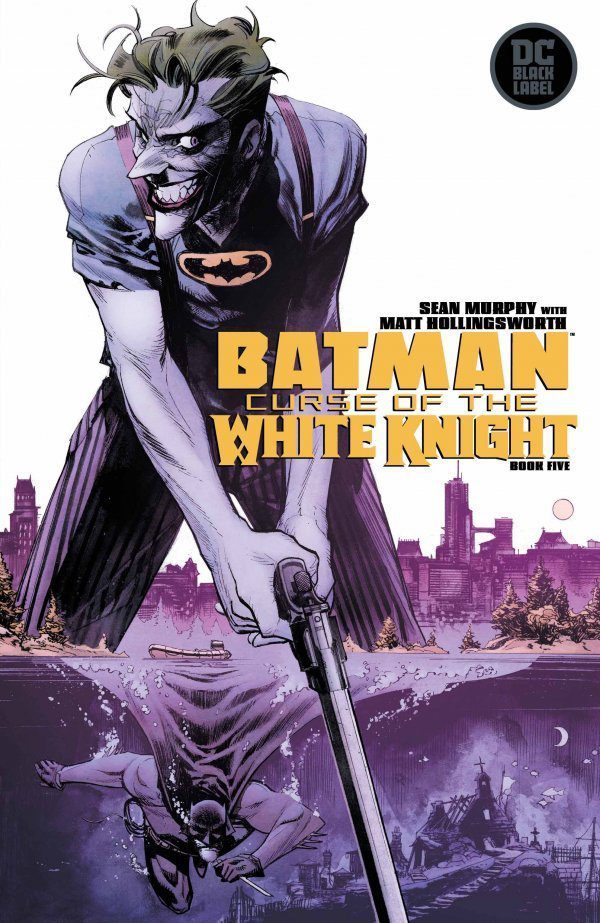 (WARNING: Spoilers ahead for Batman: Curse of the White Knight #5.)

Azrael’s Batman suit is so sick. Honestly, as much as Batman: Curse of the White Knight is more of a Joker-Batman series, Azreal has stolen the show. He’s intense, a little delusional and always looks cool. And the way Sean Murphy and Matt Hollingsworth illustrate his flaming sword is the icing on the cake. That’s not something I’d normally single out, but it’s uniquely done from any other flaming sword I’ve ever seen.

His beheading of Bane was nuts, too. I’ll admit, I audibly chuckled at that whole sequence. It was a great fight, don’t get me wrong. The thing is, Bane pops up out of nowhere — I wasn’t even certain it was I’m at first — then two pages later he gets smoked by Azrael. Thanks for playing!

But this guy has gone rogue. He’s taking everyone out who matters while Batman and Harley have found a way to bring Jack Napier back for a moment.

Now, in the course of his flashbacks, Jack mentioned the writing on the wall would be devastating for Batman. I generally trust Murphy, but it needs to be said: this better bee good if Jack and Batman are making such a big deal about it.

Lastly, Batman’s decision to skip the funeral was so weak. I get he has some serious emotional issues, but come on. It’s Jim Gordon. That’s like the closest thing he ever had to a brother.