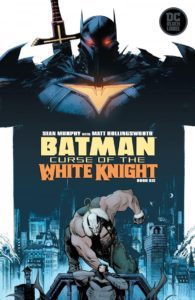 (WARNING: Spoilers for Batman: Curse of the White Knight #6.)

In the best way possible, Sean Murphy is a bad man.

A few twists and turns throughout the story are to be expected. Where’s the fun without surprises and adversity? But Murphy took it to a level entirely Batman: Curse of the White Knight #6. And this is the same guy who has already turned his corner of the Batman Universe on its head with Batman: White Knight.

Now, Batman hasn’t had a chance to react to the news, but you know he will handle this miserably. He’ll still do everything he can to take down Azrael — make no mistake, that guy isn’t gone yet. But when everything comes to an end, Bruce is going to have some serious doubt about everything he’s done.

Have you seen this:
TLDR January 2022 Solicitation

It’s one thing for him to be the relative of a double-crossing backstabber who died hundreds of years ago, but now there’s another, unfathomable layer to his identity crisis.

Of course, this is assuming what the Joker says is true. And it might be hard for Batman to disprove what his old rival said, given the way Batman: Curse of the White Knight #6 ended — unless Jason Blood lends a helping hand.