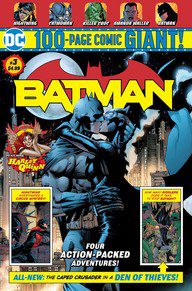 DC clearly put their best talent on Batman Giant #3’s original story, BATMAN Universe: Part One, in hopes to bring new and young readers to comic book shops. Despite being a book labeled as “Walmart Batman” this little bat story is anything but bargain bin. The story Bendis has created reminds me a lot of Batman: The Animated Series. The story follows Batman as he rushes to stop the Riddler before his guests at Wayne Manor finish their appetizers.

Similar to stories from the animated series, this comic doesn’t dwell on overly dark themes and is a great place for new readers, especially kids to get a first-hand experience with Batman. I particularly enjoyed the classic bickering and sass between Alfred and Bruce. So far this story has not really been influenced by the rest of the DC Comic Universe so it is completely plausible to pick this us and easily follow along without reading currently Batman comics or ever reading a comic before at all.

Derington’s art along with Stewart’s colors bring a brightness to the Dark Knight that I have not seen in recent Batman comics and match the tone of this more lighthearted story. The comic also features classic stories from Batman and his side characters including Nightwing: Past and Present and the valentine special Harley’s Quinn: Love Stinks.  I look forward to more of these Walmart exclusive comics and hope they bring new readers to the genre. The price, $4.99, is fantastic for new readers but if you are a regular comic reader have read the other stories featured you may want to skip this one unless the collector in you is itching for Bendis’ take on the Bat. Overall, if you like Batman this is a fun read but more importantly, if you are looking for a jumping onto point for Batman or comics, in general, this is a great way to get your feet wet.