I felt like I was the one hallucinating by the time I finished Batman: Kings of Fear #2. At first, I wasn’t entirely sure if the entire issue was a total fabrication made up in Batman’s head. Scarecrow’s fear gas clearly had him rattled and sluggish throughout the issue, but the trippy ending initially left me in doubt.

Actually, the first thing I doubted came in the first few pages of Scott’s Peterson’s story, as Batman hallucinates he’s surrounded by his villains. He started throwing some haymakers after he’d seen enough, and we see him go after Killer Croc, who dodges a punch, Bane, who deflects a punch and Ra’s al Ghul, who blocks a punch. Only, Ra’s turns into Jim Gordon, who was apparently Batman’s target the entire time.

When did Gordon become capable of THAT?

I recognize Batman’s reflexes were dulled and Gordon’s no slouch, but c’mon. Dodging a Batman punch I can buy, you just need to get very lucky. Deflecting one, now that’s a stretch. You need luck, reflexes, and precision. Flat out stuffing one of Batman’s punches though? I have to imagine there are only a few humans in the pages of DC Comics that can do that. And I wouldn’t think Gordon was one of them.

Anyways, Batman is in search of an Arkham employee that Scarecrow took a hostage and encounters some street crime along the way. He moves swiftly through each stop and eventually finds Scarecrow. Rather, Scarecrow found him.

And that’s where I was most confused. Based on what happened, I thought Batman might have been dreaming after being knocked out by Scarecrow and was his captive at Arkham the entire time. Because how the hell DID Batman get on the roof? Then I realized: the roof is in the city. The background clearly shows they’re not at Arkham.

A bizarre issue all around – in a good way though. 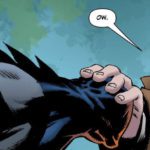