(Spoilers for Batman Last Knight on Earth #2 ahead.)

Personally, I’m not one who needs a twist for a story to blow me away. However, that doesn’t mean I don’t love a good surprise.

And boy, Batman Last Knight on Earth #2 has a few big surprises.

First, Omega, the leading villain in this story, is clearly someone Batman knows. Bruce even explains later that he feels the same way. It first became clear when Alfred ran into Scarecrow, Bane and Omega. This isn’t even one of the biggest surprises though.

Superman being “alive” was a shock, too. But that turned out to be a facade — as was Lex Luthor’s current state. Wonder Woman told Batman Luthor died before the events of Batman Last Knight on Earth #1, but it turns out he survives and has been in solitude, surrounded by Superman robots. And he’s trying to bring Superman back. Because he realizes he was wrong.

Even then, the Luthor twist, and sacrifice wasn’t the most shocking part of the book.

The big surprise came in the final pages of the issue when Batman and Wonder Woman made it to Gotham, to find out the Gray Son had finally joined the Court of Owls.

For those not familiar with Dick Grayson’s history, the first Robin is supposed to be the greatest Talon ever. Talons are the Court of Owls assassins, his great grandfather, William Cobb, being the deadliest one going — until now. Now, Dick Grayson has finally fulfilled his destiny.

Now, it seems he’s still a good guy. Why would the Court of Owls want to give anyone else control? That’s never been their m.o.

All that’s left is the answer to “who is Omega?” Has to be a member of the Bat-Family. Jason Todd and Damian Wayne would probably be the favorites if Vegas put out odds. But wouldn’t it be something if Scott Snyder went with someone out of left field? 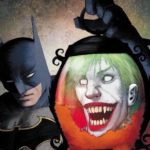