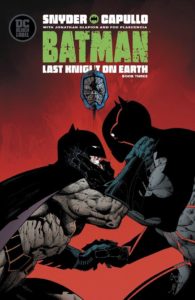 Batman: Last Knight on Earth started out strong. It had to. As much as each issue has had 50-plus pages of story, there were only three issues. From the first issues to the second, Scott Snyder and Greg Capullo’s story never skipped a beat. Non-stop chaos wrapped around one question after another.

They carried that momentum into Batman: Last Knight on Earth #3 and put a bow on this DC Black label gem.

If you haven’t read this and like Batman, this is definitely a must. The names Snyder and Capullo, combined with Batman, should reason enough to give this story a shot. But if you were still apprehensive and thought, “Man, another Batman title,” take it from someone who normally thinks the same way — this story is sick.

(WARNING: Spoilers for Batman: Last Knight on Earth #3 ahead.)

If there’s one gripe I have with this story it’s Jason Todd being dead. Killing Damian Wayne is one thing, same with Tim Drake, but no one needs to see Red Hood go down. (Hasn’t DC already tried that?) Also, Cassandra Cain is dead in this world? Shouldn’t everyone be dead then?

In all seriousness, Dick Grayson and Barbara Gordon’s new uniforms are pretty awesome. Martian Manhunter’s emaciated appearance was mortifying. In addition to the fights, those were Capullo’s top highlights.

With regard to the twist, while Bruce was surprised when Omega unmasked himself, it became pretty clear Omega was that world’s Batman when the group was in the Owl Cave.

If Snyder has a specialty it’s Batman v. Batman fights. And that’s a unique skill. Because Batman doesn’t make mistakes. Everyone knows he’s a master planner. Anytime he screws up, it’s hard to believe. But when it’s Batman v. Batman, someone has to drop the ball somewhere along the way.

Snyder always makes the mistakes believable. Honestly, Snyder’s execution of those mistakes in Batman: Last Knight on Earth and Dark Knights Metal is the linchpin in each of those stories.