The Batman Who Laughs #1 Review 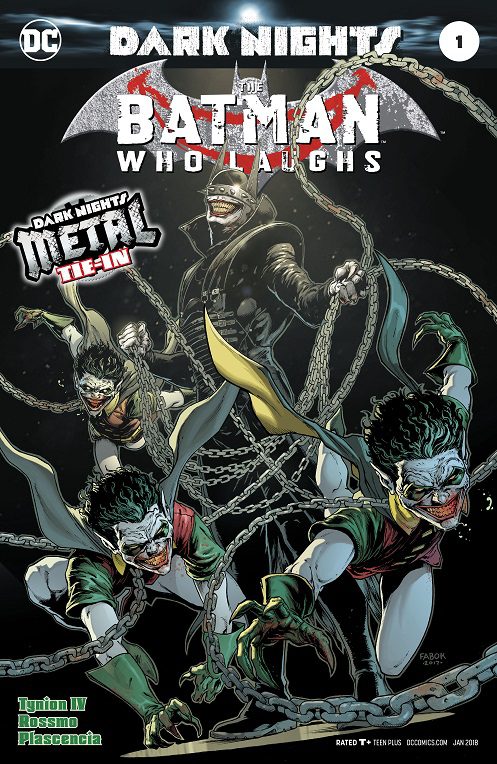 The Batman Who Laughs #1
DC Comics

On Earth 22, Gotham City is in flames and Batman is at the mercy of the Joker. After systematically taking out all of the other villains in Gotham, Joker has decided to tell his final joke. One that includes parading groups of families in front of Bruce and killing them in the same way his parents died. This final act pushes Bruce to the breaking point and the Dark Knight commits the one act that he has sworn to never commit. In the aftermath, Bruce and Clark attempt to decide what to do with the Joker’s victims as Batman tries to understand what Joker’s plan actually was.

As they discuss what to do, Bruce begins to react differently. Three days later, he invites the members of the Bat Family to a training session where he lays out what happened to him when he was infected with a new strain of toxin upon Joker’s death. As the team attempts to reassure Bruce that they can and will help him and defend the city, Batman reveals that isn’t the reason he invited them there and what follows is a bloodbath. When Bruce makes his way to the Watchtower a week later, only Superman is left to confront him. Bloody and broken, the Man of Steel is confronted by a Batman who is parading his family in front of him along with a modified strand of black kryptonite.

As the Batman who Laughs torments his latest victim, he recalls his meeting with Barbatos, his new purpose and a new part of the overall plan that will unleash an army of nightmares that the world has never seen before. 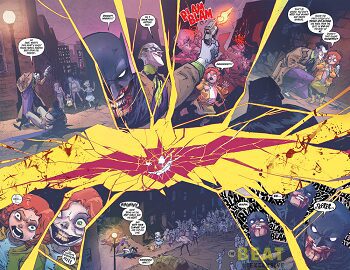 There is a sadistic beauty in this story that is remarkably different from the other one-shot introductions to the Dark Knights. Most of the other stories told the turning of Bruce Wayne as tragic tales of love and loss. Tynion IV frames this tale as a violent circus where every moment reveals a new and more twisted attraction with Batman as the ringmaster. It’s almost poetic that Barbatos has no lines in this story because this is beginning and end of the Batman who Laughs. It will be interesting to see if his violent delights are sanctioned by Barbatos, or will he and his new master clash at some point.

Rossmo’s art is both beautiful and horrific. His panels depicting violence are truly disturbing and they make sense in the world of this narrative. It’s told from the Batman who Laughs perspective, so there is no sparing the worst as a reader. This is a dark story that gives the reader a view at the darkest possibilities of Batman in a way that doesn’t hold back.