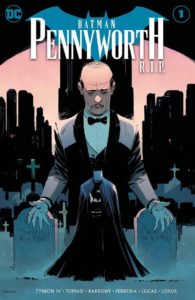 Batman: Pennyworth R.I.P. #1 really hits home for anyone who’s lost someone close or tried to help someone cope with the passing of someone important. Unfortunately, that applies to most people.

But it doesn’t alleviate the pain resulting from his death.

Batman Pennyworth: R.I.P. #1 not only displays how beloved Alfred was, but the issue also encapsulates how the man behind the scenes has always been the family’s linchpin. Although Bruce Wayne is the leader of the Bat-family, Alfred is, in many ways, the patriarch.

Without him, who knows what the Bat-family will turn into. As it is, the relationships within the family are already strained. Without Alfred, there isn’t much hope for this group to remain whole.

Which is a terrible shame, because that’s the last thing Alfred would want.

Artwork that fits each story within each story, an excellent approach to the memorialization of a legend — Batman: Pennyworth R.I.P. #1 is a must-read for all fans of Batman and/or members of the Bat-family.