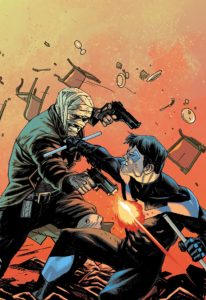 In a moment that both encompasses everything wrong with the logic of the upcoming wedding between Batman and Catwoman, Superman and Nightwing decide to take Batman out for a Bachelor Party. It’s not a bad moment, but it does shed light on the biggest problem with the wedding. As they begin what looks like the most boring Bachelor Party of all time, an explosion pulls Superman away from the group and they are attacked by Hush.

Hush has always been a problematic character after his initial introduction. He’s never really been more than just an annoyance after that and his crashing of the party only goes to prove that. His vendetta against Bruce Wayne is trivial and the fact that he brings Dick into it after they are pulled into another dimension just makes his presence that much more pathetic. Speaking of pathetic, what happens later in this issue when Hush removes his bandages is pathetic bordering on imbecilic.

The promise of what this issue could have done is wasted on moments that go nowhere, a villain that has no purchase and an overall plot that seemed thin at best. It took until the end of this issue to get to the real threat that is looming over this wedding. Something that is much more interesting than this story could hope to be. Had it spent more time on the relationship between Bruce and Dick, it would have been more compelling a prelude.