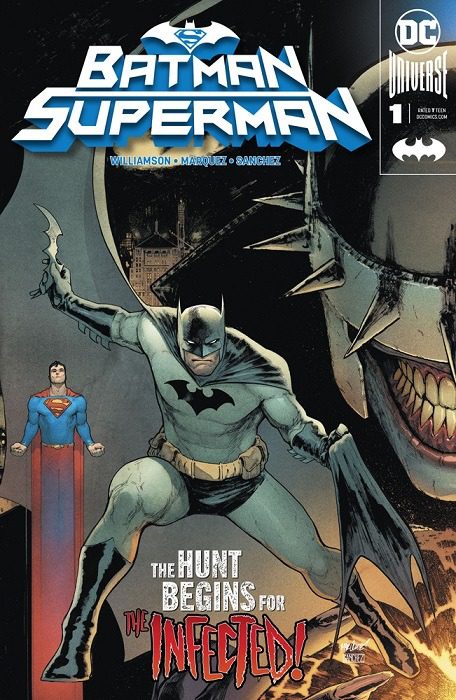 It has become a tradition in the DC Universe that whenever the universe relaunches there will be a new Batman/Superman team-up book to follow. This isn’t a new fad, Bats and Supes have been sharing titles since waaay back in “The Mightiest Team in the World,” Superman #76 (1952) when Clark and Bruce shared a bed on a cruise ship… it’s not what you think, as both heroes took a vacation on the same cruise liner and through a series of mix-ups ended up sleeping in the same room and the same bed.

All these years later, and after many adventures together, the World’s Finest heroes are back to sharing the same comic. This time the duo is facing off with the latest twisted villain to emerge from the events of Dark Knights: Metal, as the Caped Crusader and the Man of Steel are on the hunt for the Batman Who Laughs.

In this issue, Batman and Superman are tracking down The Batman Who Laughs (DC has got to come up with a better name for this character!) after he kidnaps a child in Gotham. As Bats and Supes search for the boy we are treated to captions and dialog that drives to the heart of this series. Trust. How do Batman and Superman continue to trust one another when each hero approaches crime-fighting and life from two different perspectives?

This very premise is weak. Every fan knows that Batman and Superman are going to face off with TBWL (The abbreviation for The Batman Who Laughs…which isn’t much better) Bruce is going to face off with the worst parts of himself and everything that he hates about the Joker, Clark is somehow going to be shocked at how far Batman has to go to stop/save himself, the two will betray or let each other down at a pivotal moment, they’ll argue or fight and then they will makeup, team-up, and then kick ass.

By then we will be six to seven issues into the series so the first volume of the trade will be wrapped up and then it will be time for DC to juggle the creative teams off of the comic and bring in a new writer/artist/storyline that will ignore the first arc altogether, and the audience will say nothing and the comic industry will continue to do as it always has done. Say a lot about nothing. Have no impact. Leave the real stories for the independents. And that’s mainstream media in America today.

Maybe I’m being overly callous. Maybe as an older reader, I want some substance in my comics. I want these brilliant creative minds that DC hires to be allowed to make an actual statement with these characters. Wouldn’t it be nice to see Williamson, who is a very talented comic writer (look no further than his work on his image series Nailbiter) to be allowed to really take apart Batman and Superman at the hands of the ultimate serial killing psycho? Imagine Bats and Supes having to evolve beyond the loner detective and the Big Blue Boy Scout. At this moment in pop culture it would be a blast of fresh air to see Bruce and Clark having to dig deep into their humanity and show some heart to deal with the evil around them. Not a punch or a kick, but an example of true heroics for fans to hang their hats on.

But that doesn’t sell to the mainstream. They want their empty calories and mindless tales of non-challenging storytelling, and since that’s what sells DC is more than happy to maintain the status quo instead of facing the wrath of online trolls and an army of neck-bearded fanboys.
So the remainder of this issue is the duo discovering TBWL’s bat cave and we get the big reveal and hook for this series as Supes/Bats discover a joker poisoned Billy Batson waiting to attack them dressed as a demonic Robin. The rest of the climax can be summarized in one word.
Shazam!

While no new boundaries are being pushed in this series, the story is solid, as I stated earlier Williamson is a damn good writer, so even this mainstream fare is enjoyable. Just don’t go in expecting too much.

Marquez does a great job with the visuals. Which is no easy chore on this title. Superman/Batman has become a title known for its artwork and artists as much as its main characters. The series has sported the work of creators like Ed McGuinness, Michael Turner, Dustin Nguyen, Shane Davis, Ed Benes,

Rafael Albuquerque and Rags Morales. Marquez does himself proud in this first outing and will live up to the lofty expectations that art critiques will have for this comic.

While I wish that this series had come out of the gate stronger and made a real statement about the two biggest characters in comics, this will have to do.