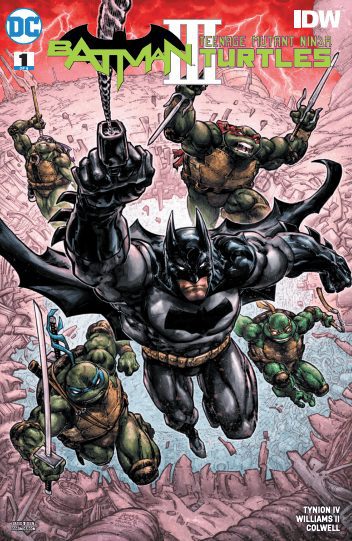 Both the original Batman/TMNT and the Sequel, Batman/TMNT II were fun, action-packed mini-series. The Turtles have gone to Gotham and Batman has visited TMNT’s New York. They’ve highlighted some awesome villains and put the heroes through tough trials. To this point, it’s been an enjoyable marriage — which only makes it harder for James Tynion IV and Freddie E. Williams II to maintain the momentum.

In simpler terms: Batman/TMNT III has a lot to live up to. So when the idea of a third chapter popped up, it was hard to imagine what would come next. It still seemed like a fun idea, but Tynion had seemingly run his course with plot ideas.

Turns out, that’s not the case whatsoever. Tynion has inserted these five characters, along with some of their best supporting cast, into a tangled story that could go in any direction.

The two previous stories were group stories, with some of the characters getting more ink than others, but the closest thing to a main character in the first two books was Donatello in Batman/TMNT II. (And that’s still a bit of a stretch.) In Batman/TMNT III #1, we find out this is a Batman story above all else. The Turtles are still prominent in the first issue, but Bruce Wayne is the one trying to make heads or tails of what’s taking place.

Williams’ art remains the right fit for this story. Although it’s a Batman story, you’re still dealing with a list of characters behaving like humans — not just drooling monsters like Killer Croc.

(Spoilers ahead if you haven’t finished reading Batman/TMNT #1.)

First off, really digging the new Batman suit. As the story goes along, the change in attire makes more sense.

Bruce drops in on a Harley Quinn heist at some big-wig event, where we see DC villains meshed together with some from the TMNT universe (i.e. Killer Croc as Bebop). They look cool and could be simply chalked up as science experiments.

Then we get a look at the Laughing Man, who we all knew was the Joker. Only, he’s a combination of the Joker and Shredder. That one is a little harder to explain.

Which then leads into the greatest surprise of them all: Raphael as Red Hood. Who knew we needed that?! Then you get the rest of the gang filing in as other ex-Robins and they look great. The best part is three of the four match up fairly well with their Robin counterparts — Michelangelo as Damian Wayne being the obvious exception. The Turtles are only copying their looks, though. This doesn’t seem to be Nightwing trapped in Leonardo’s body. It’s Leonardo wearing Nightwing garb.

That alone is reason enough to read the entire series, never mind just the next issue.

It’s still just the first issue, but Batman/TMNT III is already showing the potential to be the best chapter in this recurring mini-series.