Initially, it appeared Batman TMNT III was an alternate universe where Batman and the Teenage Mutant Ninja Turtles grew up together. A very reasonable concept and a creative idea given there are infinite realities out there. However, as Kevin Eastman’s Raphael pointed out in Batman III #2, that’s not quite the case here.

Batman TMNT III #3 continues to unravel what’s developed into a confusing predicament for the characters involved. Throughout the course of events, James Tynion IV has started to reveal what’s really gone wrong with the world.

Freddie E. Williams II’s art has always been a perfect fit for the Batman TMNT stories, dating back to the first miniseries. However, this is one of his better issues. And it’s not because of the action, though he did well with it in this issue, per usual. There are unique moments (which will be addressed in spoilers) where he’s able to perfectly capture the emotion of the characters involved.

Also, I’ve already mentioned it before, but his Raphael-Red Hood cross is outstanding. It’s a great marriage in terms of personality, which is probably Tynion’s doing, but his look is just too good.

(Big time spoilers ahead for Batman TMNT III #3. Don’t scroll down if you haven’t read the issue.)

When Tynion started things off with the Batman origin I was thinking, “Why does he think this is a good idea?” But then I thought this issue could be a flashback story to give us context about what’s Batman’s origin in this Universe. In the end, as everyone now knows, it was just a flashback, and Tynion was able to handle the death of Bruce’s parents and the birth of the TMNT seamlessly.

Now, when we come out of that look into Bruce’s fake past, we see him and Splinter conversing. This is one of those moments where Williams’ art shines. In just a few panels, he’s able to capture Batman’s confusion, frustration and sadness — emotions we don’t generally see from the character. And the same goes for Splinter, he’s compassionate and caring. The dialogue obviously helps push across what they’re going through, but these panels could be without text, and you’d still know Batman and Splinter are going through a lot.

The other two “moments” I was referring to earlier in the post were April’s amazement when she figured out who she really was after touching Donatello (a much quicker interaction than the other two) and Batman’s reunion with Alfred.

And that brings me to my last point: Splinter is in Alfred’s place, but Alfred still exists — same goes for the Joker and Shredder. Maybe the rest of you picked up on it, but after the first issue, I thought this world was void of certain characters. Even after the second issue, I figured fixing the realities would somehow magically bring everyone back that wasn’t there.

It’s a twist I particularly enjoyed and am excited to see unfold further. Because now that Oroku Saki is in the mix, more characters should come to the forefront. 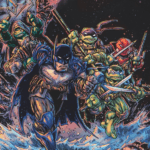