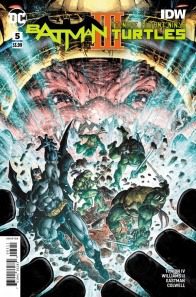 If your adrenaline isn’t pumping full-forced after reading Batman TMNT III #5, then I don’t know why you’re reading this story. This isn’t one of those series that has a greater commentary on society or dives deep into an individual’s psyche. This is about putting a stop to the villains, that’s it.

But that alone isn’t always enough to get everyone going. And while the Batman-TMNT team-up always guarantees a good time, bringing in the bat Family only ups the ante.

We’ve got Batgirl, Nightwing, Red Hood, Red Robin and Robin — the whole gang. Now, James Tyrion did kind of make it obvious that everyone was joining the fight, but the moment when Batman’s Robins and Batgirl show up, we all knew it was about to get real.

Though, we’re going to have to wait until next issue for a possible Red Hood and Raphael team-up, or Leonardo and Nightwing, and so on.

Sticking to Batman TMNT III #5, Joker had one of his most on-brand lines ever early on when he was fighting Batman:

“I don’t care who rules the multiverse. I just care about ruining your day!”

Lastly — and I have to hit on this because I review Red Hood, too — I’m not certain if Freddie E. Williams strictly kept to red Hood’s new look or did a combo of his classic look and the new one. Because when the Bat Family shows up, it looks like Jason Todd is wearing the old Red Hood mask. But then on the final page, the shadows make it hard to tell which mask he’s wearing. Either way, I like how Williams draws Red Hood. Though I will say, personally, I hope he’s rocking the old helmet with the new outfit. Seems like an awesome combo.