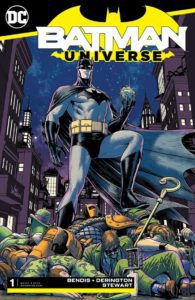 (As always with my first issue reviews, no specifics.)

Batman Universe #1 is the start of what seems like a story that won’t impact anything outside of these pages. It’s not an instance where Batman has to take on the weight of the world or something on a large scale. It’s a detective story with a lot of layers yet to unfold.

Brian Michael Bendis is able to insert one of Batman’s oldest villains, The Riddler, who can’t operate in the “War of the Worlds” type events that come around so often. Riddler clearly isn’t operating alone. It almost seems like he’s being controlled at one point. Very curious.

Bendis also incorporates a couple other DC legends, giving them both surprising entrances. (Even if you’re reading this before reading Batman universe #1, you won’t see their entrance coming.) There’s another DC character brought up in the story. Not sure how necessary the character is to the story, but it’s a fun little mention. (Another one that will catch everyone off-guard.)

The story has an even flow to it. Bends transitions from one topic to the next. Aside from the cameos, the dialogue between Batman and Alfred is the best part of the issue. Their subtle, dry humor is always a pleasant surprise.

The artwork is good. Nothing too flashy. Personally, not my favorite look for Batman. The action was good. Definitely had a small-scale feeling. Which is fitting for the story.

Not a must-read, but a fun one if you’re looking for something different and can’t get caught up in the other, heavier Batman miniseries.