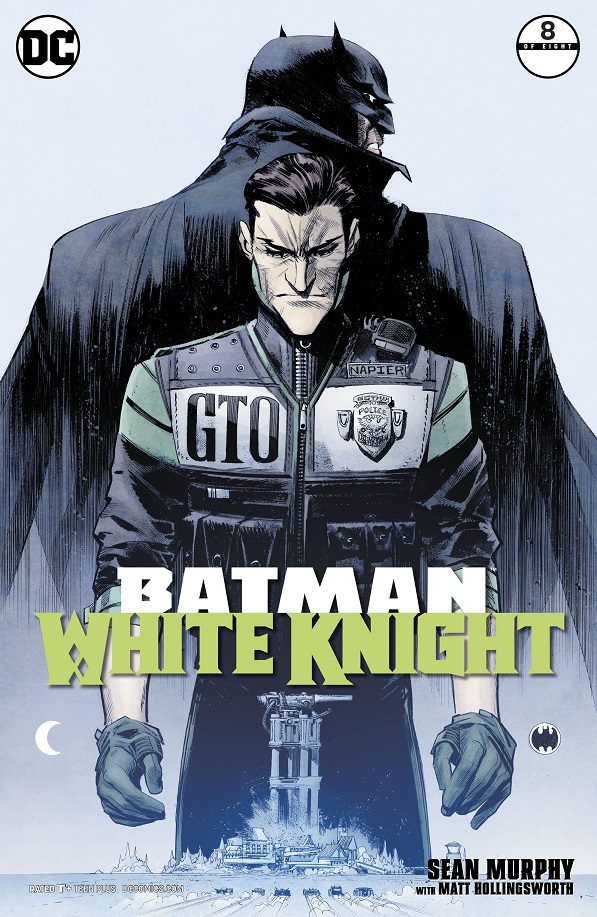 This issue was the conclusion of the series that quickly became my absolute favorite. White Knight has been quite an emotional ride for me that I’ve said more than once was going to land me in the Arkham Asylum. This issue took it ten steps further wrapping it all up while of course in Murphy’s fashion through the series, serving up many more than one mind-bending twist. All the way up to the very last pages.

Issue #8 picks up right where #7 had left off. The Joker/Jack Napier and Batman teaming up to save Gotham. That’s one of the strangest sentences I’ve ever typed. They need to take down Neo Joker and Mad Hatter. Napier is losing his grip on Joker. He’s not sure how long he has before he may be gone permanently and Joker is all that’s left. Clayface is freed of Jokers mind control device and there’s chaos everywhere. Seems only Harley can escape in time to finally gets her hands on the imposter that’s been holding Joker back all these years and there’s a heated emotional battle between the two. Learning, as we have all through this series, that Harley Quinn and Harleen Quinzele are one and the same. With Gotham being saved by the oddest team up in history, lots of emotions and evaluations follow between the iconic nemesis’s. Jack/Joker finally gives Harley what she’s always deserved. Batman, feeling warm-hearted gives some special treatment to them both. Bruce does some serious self-reflecting with a little help from an old friend and decides he needs to keep close to the ones he has. Also, is he really the world’s greatest detective? The end had me stunned!

I had such a hard time writing a brief summary of this without putting too much out there. I was beyond pleased with the way this ended!! The whole way through this series I’ve never been disappointed with any dialogue or execution. Some issues have had in some ways up to 4 twists in them. I was coming up with wild theory after theory in the months between issues. The finale totally nailed it! And of course, even left me with a little something to guess about. I love that about Sean Murphy’s writing. That little question at the end from Batman to Harley, even his art, he made sure to leave a smug look on her face so I can’t actually tell if she’s telling the truth!

I literally cried more than once reading this. The dialogue between Bruce and Jack. Jack and Harley. The letter from Alfred was finally read. Tearjerkers and a lot of action. That’s exactly what White Knight needed to wrap with. It showed a side of two of the most iconic DC characters actually learning things about themselves and each other by almost reversing roles. Batman actually dropping the ego. I absolutely loved how humbled he became in this issue. Joker too. Finally understanding that deep down he was a good man. He just wanted to be important. To me, this has been the most definitive Batman storyline to clearly show that Joker and Batman are nothing without each other. The Killing Joke to follow. The art is beyond amazing. With so much going on in some of these panels, you don’t miss one detail.

The transformations from Napier to Joker and back were some of the best. Both artistically and in the script. You could not only see it, you could actually tell it was not Napier but Joker. Two different people could show up in one dialogue bubble but I could still read instantly it was now Joker. There are so many reasons this is my new favorite mini-series. I’m so excited to see what comes next from Murphy. Id love to see what else he could do with Batman or any other character. This was just such a unique take on the Caped Crusader. It showed a human side of both him and The Clown Prince of Crime I’d never expect to see in a comic.