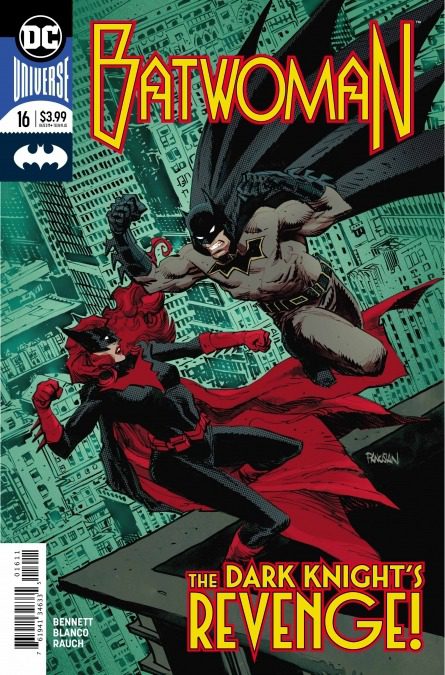 Batwoman is confronted in Gotham with what her sister is doing at the urging of Tahani and Batman is caught in the middle of Kate’s family and personal drama as he tries to save the city from Alice’s plan.

Batman gives Kate a choice when it looks like her sister is losing her grip on reality and Kate chooses her sister over everything else. A choice that could cost lives. As she pleads with Bruce to let her take her sister with her, Alice does not make Batman’s choice that hard when she starts blowing things up around them. Kate’s choices are part of the problem with this story. They’ve been a character issue both in her own comic and in her role in Detective Comics as well and that is evident in this issue as she seems willing to overlook the worst impulses in her family members in order to protect them from the justice that they seem to deserve.

If she actually had an alternative that made sense, I might be on her side with this one, but it doesn’t seem evident in this issue that there is anything other Kate’s emotions fueling her actions. I found her actions in this issue troubling for more than one reason, the biggest one being that she seems to be drifting through her own story like some rudderless ship being steered by whatever external thing comes at her. I don’t get the sense of her being a full character like in previous issues and it makes her less dynamic a presence in this issue.

There is some great art and details in this issue, but if this were my first introduction to Batwoman as a character or my first Batwoman comic to pick up, I would have a hard time finding something in her portrayal in this issue to compel me to read the next issue.