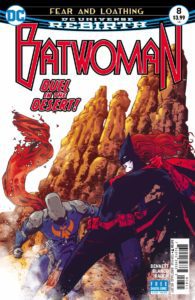 Poisoned by Scarecrow’s fear toxin, Batwoman is slowly losing her mind. Scarecrow has taken her deep underground to his private lair and is keeping her prisoner as he continues his work for The Many Arms of Death. As he and Fatima contemplate what Batwoman is dreaming of, Kate herself is still with Safiyah, clearing infected foxes from the area around the house until she bursts through a vision of her family. A vision that quickly becomes nightmarish before the hero regains her senses and returns to the present. 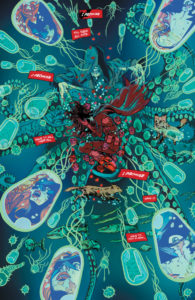 Kate finds herself in a prison with a colony soldier who works for her father. As the two of them argue, the soldier tells her that he is on the same mission as she is; to take down The Many Arms of Death. As Crane intervenes to monologue to them, Kate puts a plan into action to escape. As she and the soldier make their way out of their cell, they are attacked with another form of fear gas and this time it takes them to a world of nightmares that neither one might survive.

The continuation of the storyline from the last issue is well paced. I like that Kate is confronting her fears and that there is a moment in the story where she proves as capable as Bruce in how she manages to escape from the cell. Bennett continues to write great character pieces and her depiction of Scarecrow is one of the more terrifying in both his brilliance and insanity. Blanco’s art is well done as well and the backgrounds add to the feeling of disorientation that the characters must be feeling.