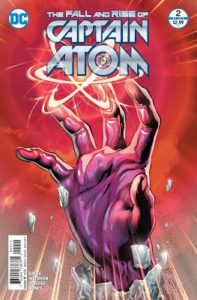 The Fall and Rise of Captain Atom #2
DC Comics

Written by: Carey Bates and Greg Weisman
Art by: Will Conrad
Colors by: Ivan Nunes

Nathaniel Adams is a man out of time, both figuratively and literally. After the events of the first issue, Captain Atom finds himself alive and depowered in the year 1996. A year that in which he can remember details about his life and memories of the future, but is absent one essential hallmark: there are no superheroes. This doesn’t stop the veteran and military hero from trying to be a hero in his own way. A way that, unfortunately, gets him sent straight to the emergency room. As he begins his recovery, he reflects on his new circumstances and how he came to be in this time at the same time developing a relationship with Dr. Sato, the lovely young doctor who treated his injuries. 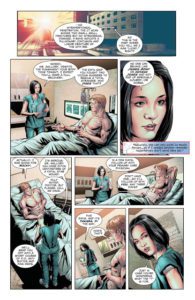 As he tries to make sense of where and when he is, he enlists the help of a physics professor using the guise of being a writer of speculative fiction. He continues to find fulfillment in his new life and time. He finds a job that he enjoys, he and Dr. Sato get married and hope to start a family. Finding a semblance of balance and harmony in his life prove more and more difficult as he envisions disaster befalling his existence at every turn. His dread is only enhanced by the gradual re-emergence of his powers, an unexpected announcement from his wife and an event that no hero would ignore, powerless or not. 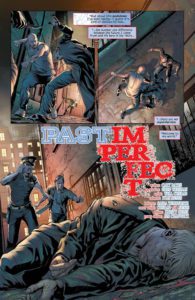 The Fall and Rise of Captain Atom continues to be a story of both intrigue and tragedy. Carey Bates and Greg Weisman continue to do a really good job of letting the reader feel as displaced as Captain Atom while telling an intimate story with layers of emotion, trepidation and triumph. Will Conrad and Ivan Nunes have conveyed the stories moments exceedingly well in the art. There is a noticeable brightness in the moments where Nathaniel is giving over to his joy, but the shading conveys the moments when the reality of his situation begin to creep back in. I was never the biggest fan of the character of Captain Atom, but I find myself drawn to this story and its conclusion.