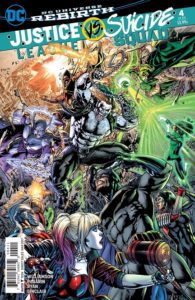 The original Task Force X is on the attack in the opening pages of this issue. Led by Maxwell Lord, the team of super powered villains has breached the security of Belle Reve Penitentiary and come face to face with both the current Suicide Squad and the Justice League. As the battle rages throughout the facility, Max uses the distraction to work his way deep into the facility where he is confronted by Killer Frost. Everyone finds themselves locked in battle between Johnny Sorrow’s demon army and the rest of the villains as Amanda Waller, Deadshot and Batman attempt to take down a raging Lobo before he kills everyone.

All of the characters are given their moments in the issue and the pacing continues to be solid. Unfortunately, the reveal of Max’s big plan was 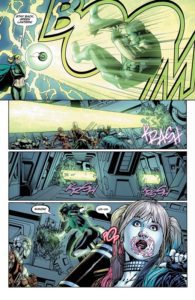 disappointing only in that it was predictable. Joshua Williamson’s plotting for the story continues to be strong and it is keeping me invested and interested in the next issue, but the final reveal in this issue was a minor let down that can absolutely be redeemed next issue. Fernando Pasarin does a great job with the visuals and his splash pages are gorgeous to look at and there is real attention to not only the foreground action, but the background details as well.

While this part of the story didn’t exactly end on a high note for me personally, the overall story continues to keep me interested. Here’s hoping that the next issue keeps my interest as peaked as the previous issues have.

Justice League vs. Suicide Squad’s story continues to draw you in and you want to keep reading. The art is great and the action beats are natural and flow well. The end reveal is a little too predictable and not that compelling as a plot point.