Bill & Ted Save The Universe #3 REVIEW 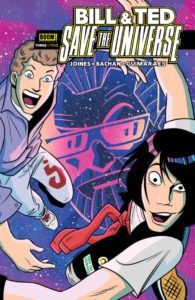 The third issue in this five part series puts out unlikely heroes in a world of danger!  Or is it a universe?  Either way, Bill and Ted have to use their brains to get out of this fight.  And without spoiling too much, the succeed.  It is now how they win, but what it means for the story that they do.  This issue brings more depth into the series.  Bill and Ted have to decide what is really important to them.  Their moms have to figure out why they went off into space and what is keeping them there.  And Decon has to figure out whose side he is on.  Like I said, lots of depth.  I was pleasantly surprised to find that on 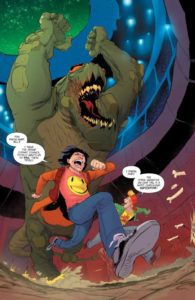 This run of Bill and Ted only has two issues left and I hope this one is a good example of how they are going to be.  While I enjoy a fun comic that entertains, it is even better when it also has character development.  They also manage to make it still all feel like it belongs in its universe.  You could easily make this run into a third, not as good but still watchable, Bill & Ted film.  Granted, it would have to be straight to Netflix or the like, but I would totally watch it, most excellent reader!