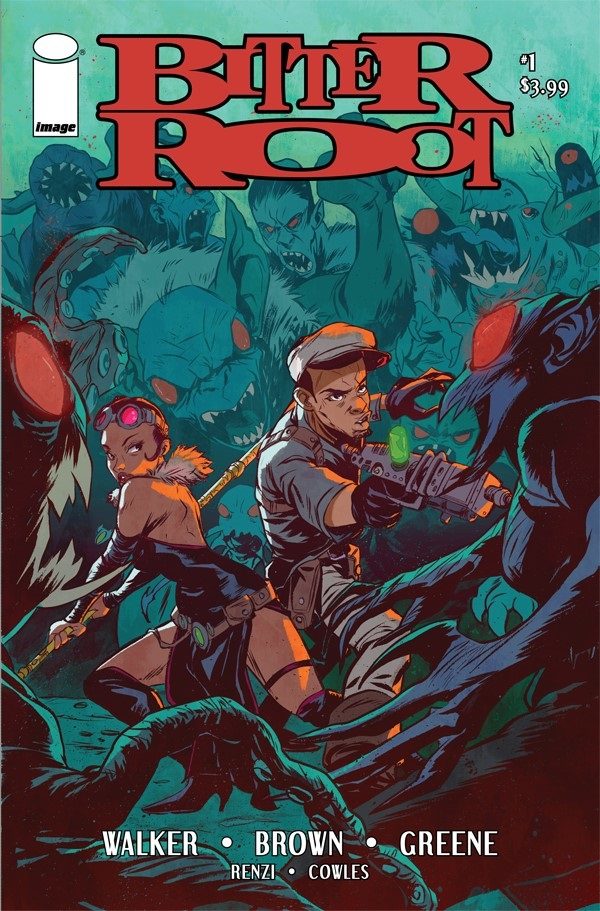 We’re here with the first issue of Bitter Root and it brings us to a lovely setting in New York City in the 1920’s. More specifically, it’s in Harlem where our family of protagonists known as the Sangerye family reside. Many believe that their shop is just to make herbs and medicine. However, they are here to help protect the city and humanity itself from monsters. The issue starts off with introducing some of our main characters from the family. We have Ma Etta who has been in the business for quite some time now. Then there’s the lovely Blink. She is someone that wants to get her hands dirty, but not just from grinding herbs and roots for serums to help those in need.

The cousins Cullen and Berg are shown who are trying to maintain a couple of monsters. Here is where we see Blink shine as she comes in later against Etta’s will and shows that she is more than capable of handle herself against large creatures, even better than one of the men in her family. I think it’s also important to bring up the struggle Blink has here. She is a woman in the 20’s and we know that for many years (even today) women aren’t given equal opportunity and I love how she is willing to fight (literally) to progress forward. I’m sure she’ll still learn the methods of making the right serums when needed, but it’s made clear that she will be needed on the field to help fight these creatures as later we are shown more monsters and not all of them have giant teeth and claws.

The art team does a fantastic job here. The coloring is so vibrant while still giving the late-night mood in it since most of the issue takes place at night. The paneling is done greatly here when it comes to the action to really help everything flow smoothly with one page in particular that I really enjoyed how the fight was portrayed on the page. The lettering is done as well as can be expected. None of it is separated by different colors in the bubbles for certain characters but when you’re not trying to make it flashy, it’s important to make sure what needs to be emphasized in the script.

Bitter Roots starts off very strong with a great set of characters while mildly introducing a villain. It comes off as very fun, hits on how society expects you to be due to your gender well enough, and reading about a family that hunts monsters of all shapes and sizes will lead readers into a heck of a good time.