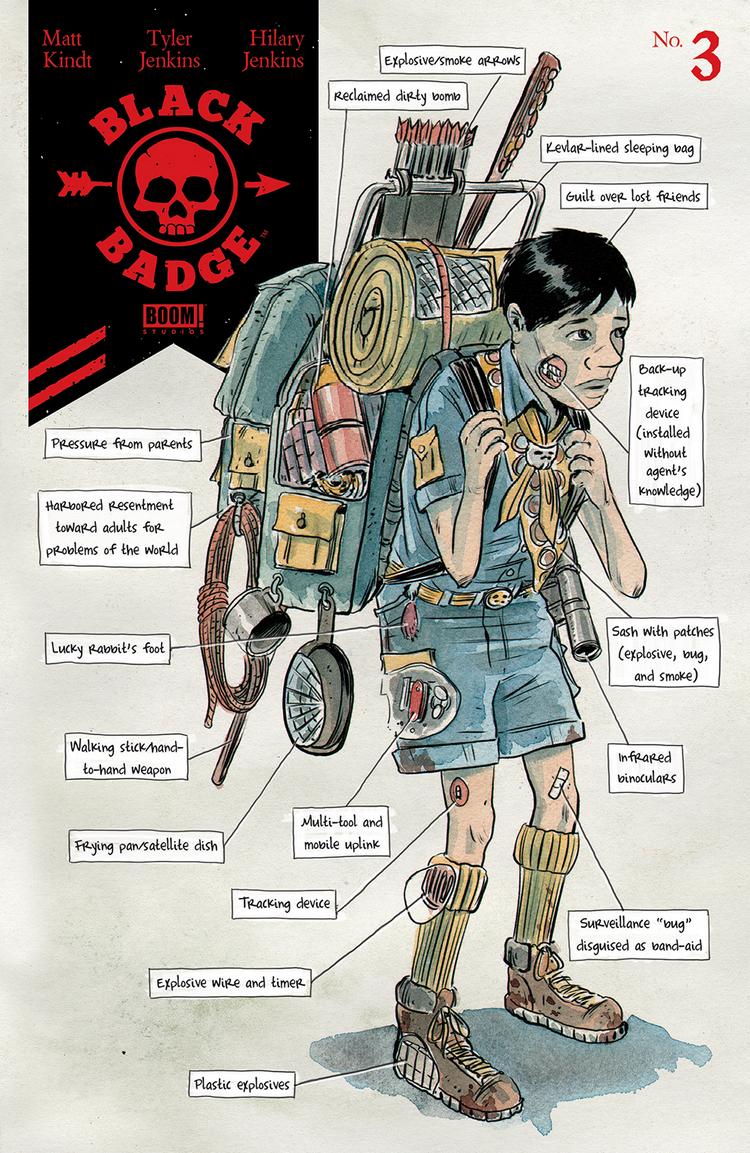 Black Badge plays off of the concept of highly trained boy scouts being used as an international paramilitary group. Comprised of age-appropriate children this group of agents is sent on various missions around the globe hiding in plain sight as just another troop of goofy kids; the difference is that these kids are highly trained operatives that can kill you McGuyver style.

In this installment, the troop is reprimanded for their actions in the last issue and have to perform some training and conditioning; which gives us a quick look at their camp A.K.A. their military headquarters. After brushing up on their hand to hand and weapons training they are sent to the sands of Afghanistan where the group is supposed to escort a spy across the border into Pakistan. Things go wrong and the troop ends up in trouble.

There is a bit of nostalgia here for me, not that I ever was a secretly trained spy. (Or am I?) But it takes me back to the days of being a cub scout with my friends in elementary school. It was a fun social event, a chance to get together and play in the woods. Sure, we learned the basics of camping and the environment, but it was more about hanging out and enjoying nature. At least that was true for most of us. There were a couple of exceptions to the rule who were WAY too serious about scouting. Those guys would go on to become Eagle Scouts and eventually join the military. Maybe this story isn’t so far from the truth.

Kindt has been on a roll over the last few years. Mind MGMT, Dept. H, and his mainstream work have built up a pretty good resume. But as Kindt’s stock has risen within the industry his approach to projects has not changed and this lack of foresight is beginning to hurt him. This series is a perfect example of what I’m talking about. The premise is really solid, the story is engrossing and entertaining, all in all this is a good comic… but…and here is my gripe. The artwork, Oh the artwork!

I can understand Kindt’s choice to bring on Jenkins. Jenkins is the co-creator behind Image Comics successful Peter Panzerfaust series. Jenkins has got a style that is unique and different; one that closely mirrors the rough pencils of Kindt himself. Kindt who came into the industry through the Indies, is smitten with that unfinished, unpolished style, but here again is where my complaint comes in.

If this book had been given to another artist and marketed in a traditional manner this book would have ten times the readership it will end up with. Both Mr. and Mrs. Jenkins leave this series looking sloppy, slap-dash, and half-finished and it’s not an appealing look either. To be honest I’m shocked that Boom didn’t step in and ask for the creative team to take a second pass on the material given just how rough it looks.

I want to state that I have enjoyed the previous works of Mr. and Mrs. Jenkins. I am not trying to slander their talented names, but let’s be honest. This is not final draft quality artwork; in the end it’s this lack of quality control that will end up hurting this title. It has a very interesting premise, as I stated before, but readers are not going to stick around if these are the visuals that are going to usher them through the story.

One page, in particular, jumps out ahead of the rest and it contains one of the worst panels I have seen in a LONG TIME. The panel is an overhead shot looking down on a tent in the snow with bloody footprints leading to and from the tent. Sounds interesting right? Well, if in your head you didn’t add any color at all and the only spot colored the footprints then you would be close to the final product, and if you drew the tent like a three-year-old after too much sugar, you’d be spot on with the final printed product. I don’t have much artistic talent in my body, but I can say with 100% certainty that I could have drawn that panel verbatim in five minutes.

I don’t want to go into any further detail with the story because I don’t want comic fans wasting their time on this series. These creators have much better work out on the shelves right now and I want the fans to go seek out those works instead. I’m sure that I will catch some online flack for being this critical, and perhaps those who hold a differing opinion are right, but this just isn’t my style of comic. The coloring work is unable to stay within any lines, the pencils are often untouched leaving in lines that overlap and intersect, creating a sketchbook look, and there are panels like the one I mentioned above that look so rushed that they appear to be drawn by a hurried child.

I know that I am being overly harsh on this series, but there is a metric crap-ton of potential here and it is being totally wasted. This could and would be a great idea for a film or a TV show, but given the final product, I just can’t see fans getting behind this book and supporting it. So, in the end, I give this issue and this series a HARD pass.