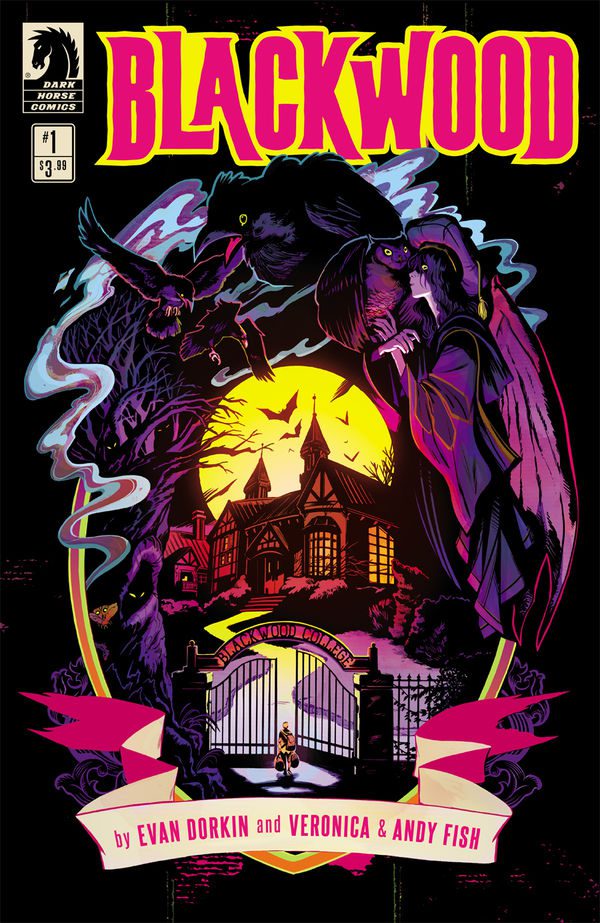 Blackwood issue one is a dark and fun ride into the mysteriously creepy college of Blackwood. New students arrive at Blackwood via train to strange and spooky occurrences at their new place of learning. The Dean isn’t all he seems, the other students are just as perplexed, and it’s only going to get worse by nightfall. Will the students learn the mysteries that are felt through Blackwood’s corridors? Or is it time to skip class?

This issue does a really good job of setting up the tone of the 4 part run. It introduces us to the main character Wren, an emo goth child with a bad attitude and bright white hair. She teams up with new buddy Reiko and meets a few new friends she’s sharing her dorm with. There’s a panel with her describing how her hair is so white that made me laugh out loud. It made me feel like I was joining in with the humor, and I really respect the writers work in this issue. The humor throughout is quite dark and sarcastic and suits my personal taste so I found this a joy to read.

The opening panels begin with a phone call being made from within Blackwood. We see someone warning of the colleges dark past just as they are taking their final breath. A teacher is conjuring some kind of spell, and then we cut to the train carrying our antagonist. She arrives at the college, meets new friends, settles in the dorm and meets her secretive Dean briefly. By nightfall, Wren and her friends all have the same disturbing dream that leads them on a path to uncover the college’s dark truth. It’s a dark and moody comic narratively due mainly to the main character Wren. However, it is light and fun in places injecting humor at just the right times to lift it.

Its aimed at a younger audience than myself with its college setting and pop culture references, ( “I won’t tweet it.” - “You can shove half a GameStop in there” ), but I did fully enjoy its dark setting and characters. It’s quite reminiscent of Harry Potter which I’m sure is what Eric Dorkin was aiming for. Although, by the end of this issue you will realize it’s far more sinister than any of Harry’s adventures.

The artwork is beautiful and its cover by Veronica Fish immediately attracted me to this. They say not to judge a book by its cover but this sucked me right in as many great artists covers do. Its art is fairly bright and colorful and is needed to contrast the dark story. I noticed small clues throughout the issue which I won’t spoil, but pay attention to the background like it’s a Leslie Nielsen movie. One I will say is the train taking them to the college was number 808; which is the penal code for disturbing the peace. Judging by the closing panels, the student’s peace is most definitely disturbed. I enjoyed this a lot but you have to have a certain fondness for student humor or I think you’ll find this a hard read.

Blackwood issue 1 is out now, and I would recommend this to any fan of Harry Potter, the Adams family or a fan of magic in general. I only mark this down to 7 due to it not being my demographic as I did find it a great first issue. Dust off your diaries and head down to Blackwood. (No running in the halls.)

blackwood eric dorkin Veronica Fish
Are you an Insider?News, reviews, & updates are just the beginning.