What a start to the next chapter of Bloodshot.

I’m still not certain which was their best panel: Bloodshot smashing that scientist’s face in or when he stares everyone down right after half of his face had been shot off, right before he went full berserker mode. There’s also the moment when he actually wakes up from the induced coma. Or even the end of the training session when half of his torso was blown off. Not to mention when he spit the bullets out on the very next page.

Just an all-around visually stunning piece. What I found most impressive in all of it was all the aforementioned panels were all very different from one another. That’s what makes it so hard to put one head and shoulders above the others.

While I’m gushing over the artwork, the story was good, too. But Lashley and Rodriguez, as well as inkers Ryan Winn, Brian Thies, and Oliver Borges deserve a ton of credit for producing great work panel after panel.

The one thing about the story itself: most of it didn’t matter. Roughly 95 percent of the whole issue was a fabrication in Bloodshot’s head, made up by Project Rising Spirit. Other than Bloodshot bursting out of the coma and attacking everyone, it was all an attempt to give him his fake memories. 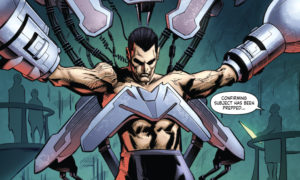 In Bloodshot Spirit Rising #1 this was the third time Project Rising Spirit tried to implant a fake memory. Not sure how they fix things from here, but I cannot wait to see where Bloodshot Rising Spirit goes next.