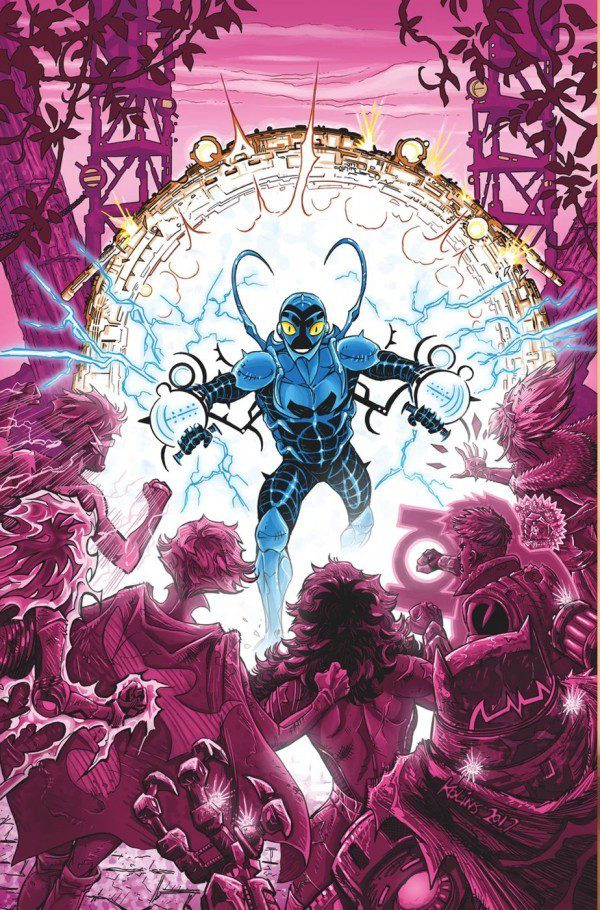 Previously in Blue Beetle, Jamie Reyes has recently required the Blue Beetle Scarab and taken back the mantle. Terri and Tina, Flash and Batman from the 31st century, now working at Kord industries decide it’s time to head back to the future.

In Blue Beetle #13 we find Jamie is working with Tina and Terri to build a cosmic treadmill. The only thing that’s needed is Blue Beetle to supply power to the machine. A malfunction happens, sending Jamie and Terri to the 31st century alone. After landing in what used to be Paradise Island, the due run right into a fight between the Legion of Doom and the 31st Century Justice League. Seconds after the Flash originally got launched back in time.

Wonder Woman claims Blue Beetle is actually Lady Styx and attempts to rip his armor off. The scarab defends itself and tazes her. The League is able to hurl the Legion through a gate directed to the planet Nirvana. Once flash tells them what happened Wonder Woman let Blue Beetle go. After being introduced to the 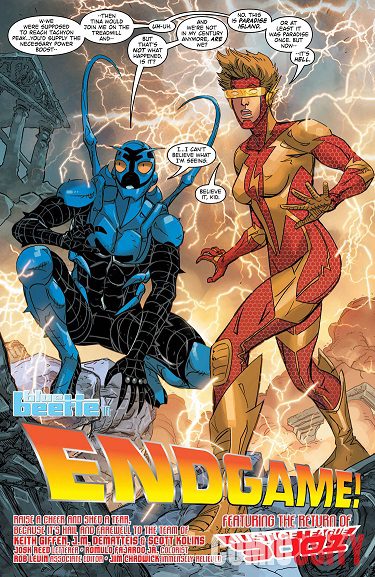 league, Terri and Jamie are suddenly teleported away. The land on the Planet Naltor. Home of Lady Styx. Right when the due attempts an attack they find their powers stopped working.

It’s revealed Lady Styx is Eons old and actually knew Jamie in his time. She’s revealed to be his friend Brenda’s Aunt, Tia Amparo or La Dama as she likes to be called. She also claims to be Terri’s mother right before sending both of them back to the 21st century. Ted Kord and Tina are waiting upon their arrival.  At the end, it seems Jamie doesn’t quite remember the adventure and takes off for his date. We see Brenda and her aunt dancing, closing on a menacing shot of her eyes glowing.

For the most part, this series has actually been very good. Acting as a continuation of Justice League 3000 and finally giving us Ted Kord back. The dynamic between Jamie and Ted is fantastic and you really grow with Jamie. After the clunker that was the New 52 Blue Beetle this book is a breath of fresh air. I hope it lasts, though it doesn’t seem to be selling well. I really encourage anyone who is a fan of Jamie Reyes, whether through Infinite Crisis, Young Justice, Teen Titans, Smallville, Injustice 2 or any other form to go out and buy this book! With a great art style that is unique and a wonderful story, this is a can’t miss title for any fan of the character.