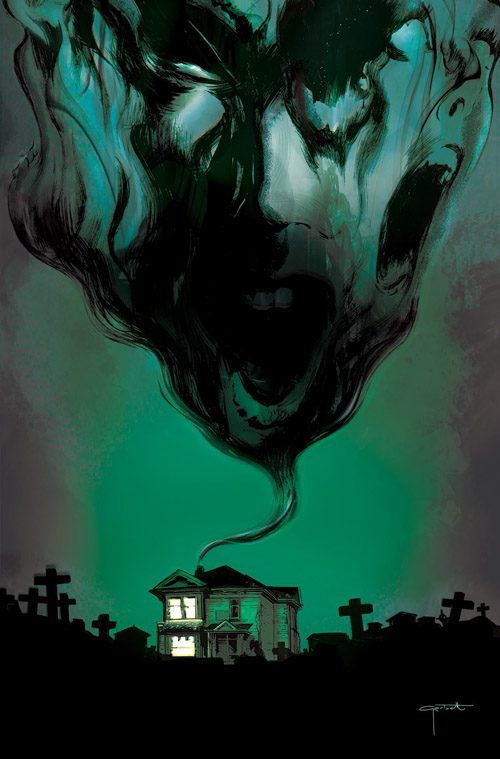 Bone Parish is very unique and quite twisted take on, how do I label this, Crime/horror/Supernatural Family drama? I guess that means it’s close to being in it’s own category. Without giving too much away the family members each play a role in the supplying, manufacturing and cultivating of a new drug that the demand is growing out of control for. It’s a drug named ‘Ash’. The drug that makes you able to see and experience life of the dead individual’s ashes you’ve ingested. Now there’s overdoses and other parties interested in the family’s growing business and not only are they interested, but they’re going to take it either way.

Brae, the oldest son is definitely taking the brunt of all the drama in this family. He’s carrying the weight that no one is appreciating. Seeing flashbacks of him and his father (who we see his mother talking to through ‘ash’ on and off through the comic) clarified a lot of his character. He was pretty much put into this role as a young man. The Mob life. His Mother is taking charge but making horrible decisions. For how far out this story is, there’s a lot of character building and descriptive flashbacks that give each of them a totally realistic feel. Almost like watching a well-scripted movie only better. Because I get to read it.

The younger brother Leon is introduced and the introduction leads to some serious questions about Brigitte and where this story is going. She definitely has shady motives and I am not sure what she’s doing with the drug or how she learned to make it but it’s seriously screwed up. Terrifyingly intense stuff. The major Supernatural mode kicks back in an extreme way. As twisted as this story is, I totally didn’t expect to see it going this direction and it’s absolutely intriguing. I’ve read a lot of horror comics and the genre is one of my favorites. This one is definitely something way different. I highly recommend this to horror fans and fans of a few other genres. It’s another Indie comic that has taken ranks as one of my must reads.

I’m a huge fan of all things New Orleans. The mythologies alone are enough to drive tourists in that direction. I’m a fan of the surroundings amongst so much more. The artists captured the streets and cemeteries and feel of the city. After being there a few times, I could actually hear the music as it was drawn on the pages in musical notes. It’s just gritty enough to capture the crime aspects but smooth enough with just enough color to convey what’s happening in each moment and with amazing expressions. I feel like Bunn has gone above and beyond in this title. The creative it takes to write something like this is or even think of the idea of the story is just insane. I’m not totally sure where it’s going. It’s seriously an awesome read. Opening my mind read more comics like these has been one of the best decisions I’ve made when it comes to comics. Supernatural Crime comics are another to add to my list.