Boss Monster : The 8 bit, dungeon crawling, side scrolling, … card game?! – Plus A CONTEST!

Castlevania. Super Mario Brothers. Metroid. Ghost and Goblins. – All 8 bit side scrolling video games that ruled the 80’s. Since then hundreds (if not thousands thanks to mobile apps) have graced the market. But there’s only one card game, that took the love of these classics and brought them to the table top, and that’s Brotherwise games BOSS MONSTER.

Boss Monster is deemed a “dungeon building card game”, where 2 to 4 players compete to build the ultimate side-scrolling dungeon! Players will go head to head and try to lure and destroy hapless adventurers, racing to outbid one another to see who can build the most enticing, treasure-filled dungeon. The goal of Boss Monster is to be the first Boss to amass ten Souls, which are gained when a Hero is lured and defeated — but a player can lose if his Boss takes five Wounds from Heroes who survive his dungeon. Playing Boss Monster requires you to juggle two competing priorities: the need to lure Heroes at a faster rate than your opponents, and the need to kill those Heroes before they reach your Boss. Players can build one room per turn, each with its own damage and treasure value. More attractive rooms tend to deal less damage, so a Boss who is too greedy can become inundated with deadly Heroes. Players interact with each other by building rooms and playing Spells. Because different Heroes seek different treasure types, and rooms are built simultaneously (played face down, then revealed), this means that every “build phase” is a bidding war. Spells are instant-speed effects that can give players advantages or disrupt opponents. 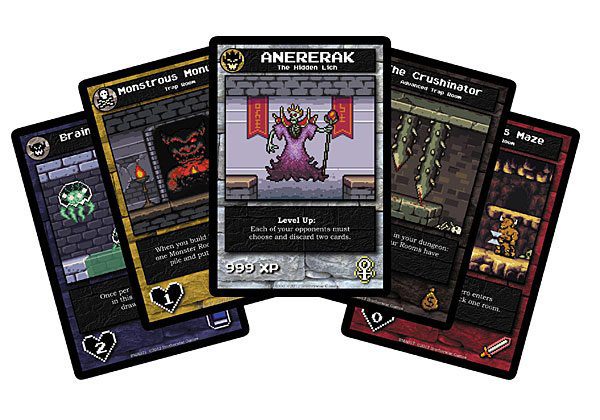 The first thing that will pull you into this game are the illustrations.  They pry open up that fuzzy nostalgia gland in your heart and you’ll see nods to all sorts of things including Zelda and Dungeons and Dragons.  The game play is fast, fun, and casual. It has just enough depth to provide for light strategy which makes it a great game to play with the family but seasoned boardgamers will find some deeper tactics to explore. Players who carefully plan their dungeons and use of spell cards will see greater options. There’s a good amount of replay-ability as you will never see all the cards and heroes during one course of play.

There are two stand alone Boss Monster sets currently available, and yes, they can also be combined to give you even more options. Each main set contains over 150 cards. There are also several mini expansions. Tools of Hero-Kind is a 26-card mini-expansion that introduces item cards the heroes can equip. Magical weapons, armor, items and scrolls will attach themselves to Heroes as they come into town. Of course, with bigger risks come bigger rewards. Should you manage to defeat a hero carrying an Item, you’ll be able to use the one-time “Reward” effect of that item to further your own nefarious goals. The Crash Landing expansion lets you expand the game to 5-6 players and introduces a new set of science fiction-themed Bosses, Heroes, Spells, and an all new treasure type, the Alien Artifact. Implements of Destruction is a recently released mini expansion that features 24 more items and 5 new bosses. You can get all of these awesome products, plus custom card sleeves, game mats, and more through the Brotherwise Games store at fantastic prices!

WIN A BOSS MONSTER BASE GAME PLUS EXPANSION!
Brotherwise Games has an all new game ready for release called UNEARTH. Unearth is a dice placement game for 2-4 players from the makers of the hit game, Boss Monster. Unearth is easy to learn, but full of surprises that will engage gamers at all levels. The game looks incredible and they are currently taking pre-orders on their website. If you pre-order the game, not only will you be saving $5.00 but you will also be getting FOUR exclusive cards! You’ll receive two exclusive “wonder” cards and two exclusive “end of age” cards.