The Brave And The Bold: Batman and Wonder Woman #2 Review 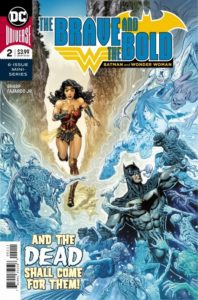 The Brave and the Bold: Batman and Wonder Woman #2
DC Comics

Wonder Woman tries to quell the fighting between the inhabitants of Tir Na Nog, while Batman fights off the Phooka.

I’ve been dying to see DC heroes given the epic fantasy treatment, and though Dark Nights: Metal gave us a taste of that, it’s still only fantasy elements. This mini-series seems has scratched that itch, and even though it isn’t perfect, Wonder Woman and Batman’s collision with Celtic Folklore has been an interesting read as well a beauty to look at.

Having Wonder Woman brought in as peacemaker was a great call by writer/artist Liam Sharp. Creators are so quick to dwell on her warrior side that they forget what truly makes her character special. Batman, however, is in the flip side of that. Though he too can be looked at as a symbol for good, he doesn’t quite encourage harmony like Diana, and Sharp understands the dynamic between the two heroes, which makes them a great yin and yang. This comic book is very exposition heavy, it’s best enjoyed as a slow-burn. It does allow for neat character moments like Diana explaining her world and finding common ground with the creatures of Tir Na Nog. There may not be a lot of Batman but every time he appears it’s a great showing. Him fighting off the magic hallucinations and the conversation with Alfred was a lot of fun to read. 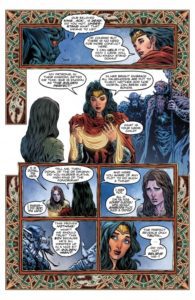 The artwork is gorgeous, Liam Sharp is unleashed onto each page. It makes me want to see him continue to draw his own scripts, he’s clearly inspired. There are so many details to notice, even the way Romulo Fajardo colors with gold and green adds to it. The green Batcave was trippy to see at first but it gave off such a creepy vibe that I was soon into the interpretation. Batman’s dwelling should be unsettling and weird. The new incarnation of the Batsuit has not looked this good since Greg Capullo created it. It’s a very old meets new school Batman look going on in this issue that I adore. The creatures, the backgrounds, the costumes, there is a lot to love.

I don’t know what Cernunnos’ deal is or how it ties into King Elatha’s, but the foreshadowing of what’s to come isn’t subtle. This story may be too slow and dialogue heavy for some people, but I’m enjoying it, and this issue was much stronger than the last. I am looking at it as two DC characters being thrown into some fantasy world and so I don’t expect Wonder Woman and Batman to constantly be at the forefront and beating up bad guys. I like it for what it is, and I feel like Sharp is succeeding in what he’s trying to accomplish.