As it’s already known with anyone I interact with, I am a BTS fan or Army. My bias is Suga, and my wrecker is V. I got into BTS in late 2015 as the girl I was talking to (we have been dating for 5 ½ years) introduced me to them. So when we heard that McDonalds and BTS were collabing, we marked the day on our calendar.

My focus and hunger weren’t for the nuggets, fries, and drink but the specialty sauces. The meal includes two sauces inspired by South Korea, and they are Sweet Chili and Cajun. Compared to the other collabs, this was the first to have a specialty item created and included. Travis Scott just added bacon and barbecue sauce to a Quarter Pounder, and J. Balvin took pickles off a Big Mac. BTS got two outstanding sauce packets. 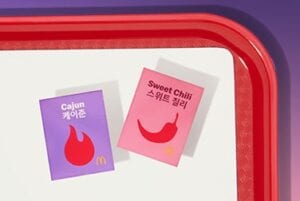 The sauces are out of this world and are worth stockpiling if they do not become standard. The sweet chili has an excellent flavor combination that starts off sweet that slowly transitions to a nice heat. The cajun sauce is a mustard based sauce that isn’t heavy on the mustard taste and allows the cajun seasoning to come through. The best experience is combining the two sauces for a beautiful mixture of flavors that attacks the taste bud, with each one complementing and highlighting the chili and cajun in each. 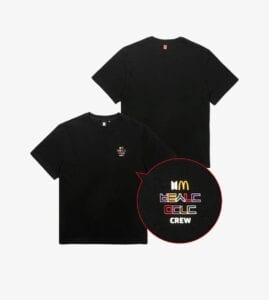 As an Army, we are accustomed to exclusive merchandise. BTS and Mcdonalds brought some of the most unique and boring products to their app Weverse. The shirts are pretty simplistic, and one of them is the same shirt the McDonalds staff are wearing or selling on eBay. The big draw to order the merch is to get a random photocard of the band or members exclusive to this promotion.

There is some criticism of the release. Many McDonalds in the US did not get the BTS meal packaging and used the regular ones. Some McDonalds staff have been selling items on eBay. Then people are trying to buy out all cases of the sauces to sell at a massive markup on eBay and FB marketplace.

Overall this is a very successful collaboration as the new sauces add a completely different and unique experience that the other meals didn’t. There isn’t a chicken nugget pillow like Travis Scott had, but I did score a Laptop Case and hopefully get a Suga Photocard.