Since we find ourselves in the midst of the Season of Fright, I figured the game I propose should reflect the holiday.  Video games have often ventured into the real of horror.  Silent Hill and Alone in the Dark among other epic titles have haunted game systems since the early 90s.

There are of course instances where horror movie franhises found their characters and stories brought to the world of video gamplay.  Jason Voohries and Freddy Kruegar were the earliest entries to my memory.  These first games saw the player attempting to survive attacks.  Both would also recently find themselves playable in the Mortal Kombat series, along with Leatherface.  Additonally franchises like Saw and Blair Witch have moved to the gamer sreeen.

Fighting as Freddy or being lost in a haunted woods is enjoyable and does help with the spirit of the season, but I can’t help feeling there is one character who would provide a truly unique game experience.

Some of you may be thinking of another legacy character, but I am referring to Charles Lee Ray aka Chucky.

Have you seen this:
Spooky All Year 'Round

I am gonna guess most of you would want to play as Chucky.  Good.  Any angle I looked at it from the only sensible gameplay involves playing as the infamous doll.  Avoiding his attacks while proving you’re not crazy or investigating a  suspicious toy would run their course to quickly for my preferences in game like this.  Hopefully you’re good with that as well because that’s the slant this story is taking.

First let’s analyze the menace.  At under 3ft, Chucky could appear unintimidating.  What gets lost in his origin is that clearly his soul wasn’t the only thing transferred that night.  Much like Puck from Alpha Flight it’s as if the man Charles Lee Ray was shrunk down, muscle condensed like a white dwarf.  That gives him the proportional strength and speed of a 40 something male.  He also has the disproportional rage, bad to begin with made worse by the transformation.  Quick, strong and deadly made for a game that allows you to hunt NPCs.

Ability being only part of the equation, motivation should be considered as well.  Of course Chucky has never really needed a reason to kill.  I still think placed against the prospect of turning human if certain kill amounts aren’t completed by certain cycles would keep the game intersting.  So that covers the basic concept so now…

Have you seen this:
Teen Titans #44 (Review) 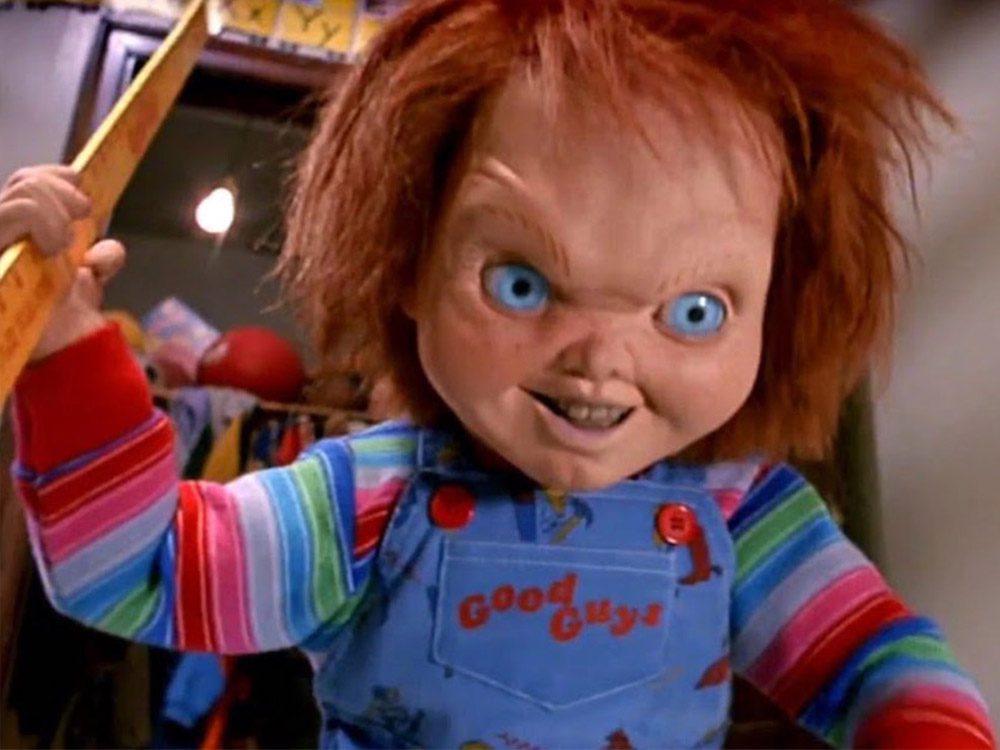 Imagine after you become aware you’re inside a new Chucky doll you realize you are at a birthday celebration.  Good Guy restaurant is filled with kids and you use the controller to look around noting Good Guys to your left and right.  You also learn how to easedrop, using enhanced hearing which later on proves useful for hearing footsteps and doors opening.  Now is your time to pick your kid.  Which one has more family members or possibly a troubled home?  Simply wait for the right distraction and take that doll’s spot and you’re headed to your new home.

Entering your new dwelling you’re still in 1st person mode.  You’re still able to look around as you’re taken around or dumped onto the floor.  A Child’s Play game needs to be more about stealth than anything.  This moment would prove as the first of many where you need to carefully control your movements.  Move the control stick too fast or far and Chucky’s head turns which would run the risk of raising suspcion depending on who is around.

Eventually Chucky would get a free moment.  Now you learn how to swap from being a kids toy to a killer.  Switching also switches the view to my preference of 3rd person.  I know some of you wouldn’t like that one.  Sorry.  Either way Chucky explores his new home, learns the layout.  Maybe he spies on someone who has stayed at home, listens to conversations and learns.

I keep saying “learn” but I feel this is one of the main reasons Chucky deserves a game and done right it would be a game changer.  Chucky is almost a combination of Jason, Freddy and Jigsaw.  He can slash you plus he is cerebral and smart.  Capable of making something look like a murder or suicide and arouse no suspicion.

Well almost no suspcion.  Chucky ending up at the school when he was left at home is gonna raise some red flags.  Or at least get a priest called.  Being seen moving outright by multiple people would also not work in his favor.  Killing the entire family the first seems like a no go either.  A player would need to pick their victims wisely.  Sneak away during lunch and kill the librarian, perhaps?  Cutting the boyfriends brakes also seems smarter than killing him in the house.

Since you are the “bad” guy, the victims would have to inherit the typical villian NPC elements.  Different people would have different levels/color.  A blue might be a soft target, yellow someone prone to investigate and red would be a fighter someone capable of taking Chucky out.

Easily the biggest barrier to any game based on a franchise is the story.  With established characters with an mythos on a differrent medium that is even trickier.  Does the story need to weave in with other stories told about this character or is it standalone?  With horror films that is even more problematic since most of the slashers are targeting people for specific reasons, unfortunately.  However, Chucky was a man who was a killer so he needs no other carrot really.  This is crucial for a game because while a Jason may just have Crystal Lake, Chucky could go from one town to the next leaving a developer to drop new objectives and increase the playthrough experience.

Kids and the toys they play with have changed over the years.  We are in the midst of the digital/technological age.  Childs Play (2019) already made efforts to make tech a big part of it’s universe.  Perhaps the next time we see Chucky he be stalking on game console.

Child's Play chucky Halloween
Are you an Insider?News, reviews, & updates are just the beginning.