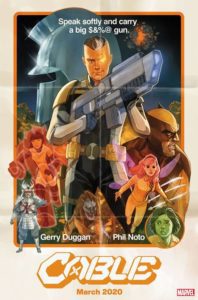 Since the relaunch of the X titles and their island settlement of Krakoa, Cable has had a small, side presence. He’s teamed up in titles and taken a family adventure in an early issue of X-men. That family adventure, with his father and sister, ties into this first issue in Gerry Duggan’s new on-going series.

On that Summers family outgoing, explore another island that merges with Krakoa. The storyline of the second island was quiet until now when Cable and friends attempt to rescue a young mutant and encounter a beast. The scope of the story starts small and mirrors the old fable of a lion with a thorn in its’ paw. The thorn is an ancient sword from a race of metal space warriors and provides the issue with a sudden sense of scale as these ancient warriors are drawn to Earth. The sword also provides another connection for Marvel’s upcoming X of Swords event.

Duggan’s writing on Deadpool and Marauders demonstrated his ability to mix violence and humor. That same flare for dialogue and action is present in Cable. Cable’s flirty friendship with fellow mutants Pixie and Armor is more of a youthful friendship than a machismo flirt. The dynamic between the three provides opportunities for them to use their powers collaboratively, while still playing the hesitant teen trying to get back home before the adults notice.

Phil Noto’s drawings and colors are beautiful. Noto’s painterly style from Poe Dameron and Black Widow continue here and helps the title feel unique amongst the group of other X-titles. Noto’s artwork creates a charming youthful adventure that opens into an epic space setting as the story unfolds. The final few pages shifts the artwork again to harder edges with red and black tones to match the gritty future timeline that is teased.

Duggan’s teased storyline and space warriors shifts the mutant focus from humankind to something on a much grander scale. That grand scale and luxurious artwork makes Cable #1 a perfect jumping on point for casual X-men fans and an essential pickup for readers keeping up with the inhabitants of Krakoa.

Have you seen this:
Batman ‘89 and Superman ‘78 movie worlds turning into comic books
Cable