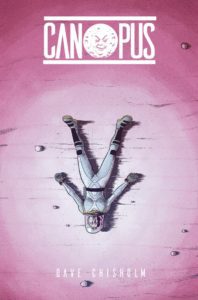 When you are on the press side of comics you live under constant bombardment of promotional pieces. Each company bangs the drum incessantly about how their new series or character is going to be the hot new thing to read or collect. Week after week. Month after month. The drone of self-promotion goes on and on and on. READ BRAND NEW ISSUE NUMBER ONE WITH THE HOLOGRAPHIC DIE-CUT LIMITED EDITION VARIANT COVER WHERE A 80-YEAR-OLD CHARACTER HAS RED HAIR INSTEAD OF BLUE! DON’T MISS THE EXCITEMENT!

Living inside the cacophony can be desensitizing. Comics stop feeling like comics and you start viewing everything as just another gluttony of consumer-based crap… no different than a supermarket shelf. Each new product is just a slight variation on the last.

Then a book like Canopus smacks you in the face and reminds you that this is art. Comics are art. That this is a craft. This is a business based on dreams and fantasy and imagination. F*ck the bottom line! THIS IS ART!

Imagine waking up on an alien planet. No memory of how you got there. No memories of being an astronaut. No memories of your previous life. You just know that every time you think of Earth you mind flashes to flames and death and you are filled with the sense of impending doom. You have got to get home and save everyone.

But this planet your on is really freaky and weird. It’s filled with traps and dangers that are made up of the traumas of your life and as you face each new danger you remember another piece of yourself. Now through in a talkative robot sidekick that keeps calling you MOM…even though you don’t remember who or what this thing is…and you have the plot for Canopus.

This is a high brow sci-fi drama that used to fuel publications like Heavy Metal. A generation of science fiction nerds was raised on a steady diet of stories and concepts just like this. It’s simple yet elegant storytelling that forces the reader to question themselves, the main character, and reality. It pushes the audience to make a choice in an age where creative decisions are more often left to the fans to dictate the pace and flow of a story. This comic will challenge you in the best of ways and for a lot of new comic readers, this book will feel and look almost foreign. It’s not the slick hyper-commercialized glossy comic that you normally find in your local comic shop. This is down and dirty storytelling that used to fill anthologies and ‘zines across the country.

Chisholm is walking in the footsteps of a unique breed of artists… a breed that is becoming more and more rare as creators give in to the pressures of their social media feeds to allow their audiences to judge, write, and create their stories for them. This ass-backward target marketing goes against everything that comics are in their purest form. This is how the story goes…not how the story goes when you get what you want. 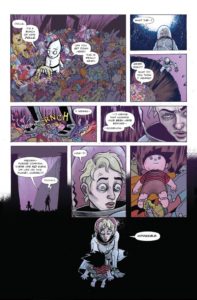 The adventure of Helen Sterling isn’t about what the audience wants. This is her story and to be honest it’s not pretty. She is faced with the punishing loss of loved ones. Confronted with scarring memories of her childhood. She wrestles with the idea that she could be losing her mind. All while isolated and alone with no real way back home. No audience would choose this fate for their main character, but Chisholm goes there with reckless abandon and the tale is all the better for it. It takes Canopus and pumps it full of heart and emotion. You care about Helen and her fate.

The indy style art and the unique narration put Chisholm in lockstep with other greats like Moebius, Richard Corben, and dozens of other artists who have faded in the age of mainstream dominance. This is a book that looks closer to Jeff Lemire’s artwork and reads like sci-fi pulp drama on steroids… or maybe acid.

Regardless, fans of science fiction and emotional storytelling need to pay attention to what is happening in this series and jump on board before it’s too late.