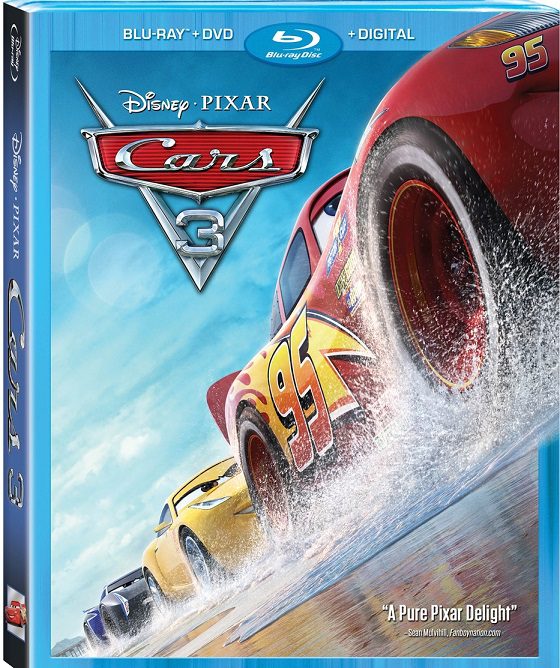 It began with a car, a track, and a passion. It was a movie that gave us a new facet to the world of Pixar animation. We’d seen talking bugs, living toys, and a world of monsters to name a few before we traveled to a world where vehicles were the dominant life in 2006’s Cars. Earlier this year we got a new generation coming after Lightning McQueen and his fellow racers in Cars 3. This week we get the release of the DVD and Blu-Ray discs that are filled with so many extras.

The fully stocked special features of the Cars 3 release are amazing! You get something for everyone in the family. I’ve seen many of the “Mater’s Tall Tales” over the years and the stories packed into these features do not disappointment. The “Cars D’oeuvres” featurette was interesting to see and felt like this was a run-through for some of the animations our of characters and would it could look like in the film. The flyovers they showed further on really give you the scope and vision the creators gave to this world.

The behind the scenes features were outstanding as you really see the spirit of the movie evolve through every process. “Generations: The Story of Cars 3” shows the absolute heart and soul of the film from the view of the people behind it including director Brian Fee, writer Kiel Murray, and story supervisor Scott Morse. The deleted scenes that were presented by the director showed different facets and directions the movie could have taken and how it changed throughout different stages of the development process. The documentary “Legendary” allows you to delve deeper into the roots of real-life racing history and the inspiration for several of the characters.

If you are an avid watcher of special features or just a casual fan of the series, I suggest you take a look at these Cars 3 extras and really feel the passion these people put into this film. The “Generations” and “Legendary” documentaries alone are worth your time and would be something enlightening to share with the children.

Have you seen this:
Chicory: A Colorful Tale (REVIEW)