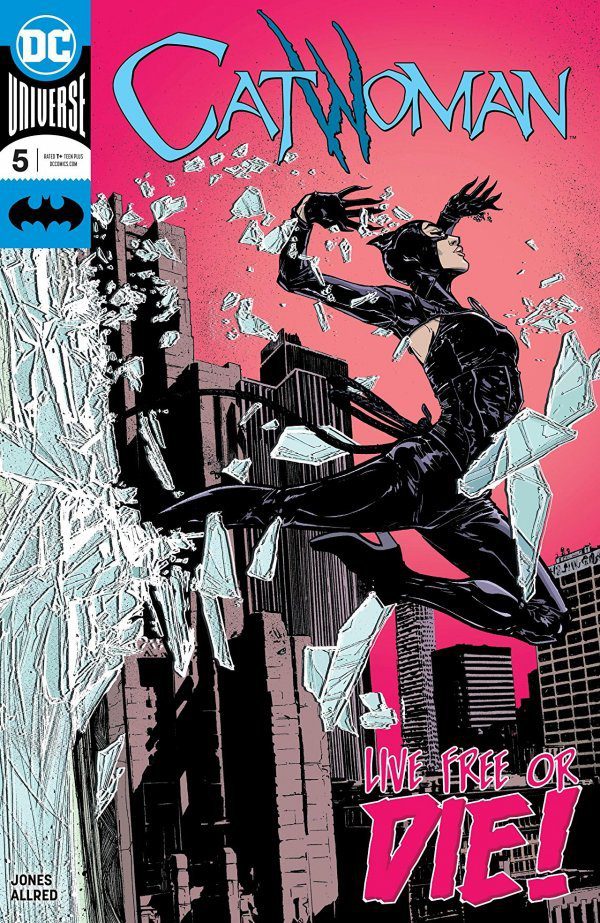 The issue picks up with Selina fighting for her and Maggie’s life before being knocked out and transported to a secret prison. Now she must fight her way out. Despite wanting to mind her own business, it is clear that Selina has to take a side in this city’s fight. While unconscious, Selina dreams of her and Bruce back in bed at the manor. The panel outlines Bruce as if he is a ghost. I have always been a big fan of Bruce and Selina’s engagement within Tom King’s Batman run so this moment was beautiful. I appreciate how much Selina is trying to move on but like in every breakup, there are days where it just hurts more.

This book has been fantastic and this issue is no different. The emotional moments within Selina’s psyche that she tries to hide from the world really elevate the character. Sometimes Selina can come off as a traditional femme fatale in comic runs but Jones deeply understands the character and isn’t afraid to give her depth.

In regards to the art, Jones has an incredible talent of making a 2D art form move at the speed of an action movie. Jones’ action sequences and panel set-up in combination with Reed’s lettering during said action sequences have been consistently well executed. Jones accomplishes creating a seamlessly dynamic flow among her panels that many comics struggle to come close to creating.

Many of the panels of this issue were intermingled between two different storylines, one showing Selina’s fight and then one showing Villa Hermosa’s “First Lady” Raina Creel continuing her mission of chaos akin to an episode of House of Cards. The use of Allred’s coloring was so important here because, without it, it would have been easy to get lost between the storylines. Selina’s backgrounds are dosed in purple hues while Raina’s are red. This created a dichotomy that was easy to discern visually. Overall, Catwoman continues to be a fantastic book that pushes Selina Kyle out of Batman’s shadow and into the spotlight she deserves.