Chronicle Books Invites You to Play “Game of Thrones” Tarot

While fans can’t predict what’s in store for the final two seasons of the HBO mega-hit television show Game of Thrones, all-new GAME OF THRONES TAROT cards are coming soon to provide unlimited hours of amusement and insight while melding the tradition of tarot with the archetypes of Game of Thrones. 2017 Comic-Con attendees will get a chance to preview the deck months in advance at the Chronicle Books booth (#1506) during the convention which runs from July 19-23 in San Diego, CA. 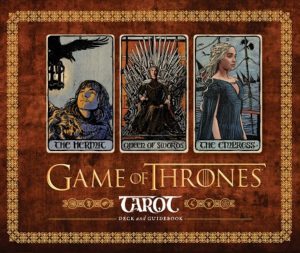 This deluxe boxed set houses a beautifully rendered and wholly original tarot deck. Each card, from the Major Arcana to the Cups, Coins, Spears, and Swords of the Minor Arcana, offers a rich and meaningful tarot experience. Game of Thrones fans will pore over a treasure trove of much-loved characters, scenes, and stories depicted in a style both surprising and true to the world of Westeros. An accompanying hardcover booklet explains the symbolism of each card and various ways to use them in a tarot reading.

According to the deck’s author, Liz Dean, this epic story is a perfect fit for tarot, “Archetypes are the foundation of every great tale—and Game of Thrones is an outstanding story, a rich weave…From the icy landscapes beyond the Wall to the hot deserts of Dorne, the world of Game of Thrones is replete with symbolism: an abundant source for a new tarot deck.” 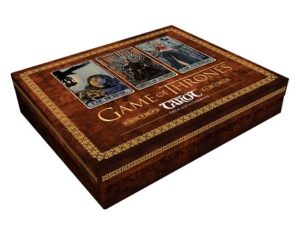 The  GAME OF THRONES TAROT is a gorgeous, enduring gift for fans who want to continue to experience the magic of Westeros.