Claybook is an indie puzzle game developed by Second Order, an independent game studio based in Helsinki, Finland. The game allows players to complete challenges, obstacles, and puzzles in a clay world. The player possesses clay blobs and solves puzzles by morphing them into different shapes in order to overcome tricky situations. Each shape has its own strengths and weaknesses and some have special powers.

The game itself looks beautiful. The color palette is focused on primary colors and the art style reminded me of something we would see from Pixar or more specifically, Toy Story. The music throughout the game is very childlike and peaceful. There were moments it actually reminded me of the opening instrumentals from the Rugrats theme. Overall, the art choices fit well with the theme of the game.

The game offers quite a few modes that add replay value. You can play through chapters by yourself or with up to four people in split-screen co-op and compete on a larger scale through leaderboards. It also has a sandbox mode where players can play freely with all of the clay shapes and environments. Similar to Minecraft or Disney Infinity, the game offers in-game creation tools that let players build their own books and chapters and share them with the community.

The physics of the clay is well implemented and creates unique gameplay. The game creates multi-color clay fluids with erosion meaning as you trail along your clay shape with pick up with its environment and change accordingly. It is a unique gameplay aspect and creates a larger challenge as the more you move the more the shape you are controlling your environment change. 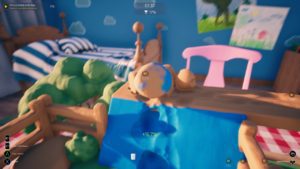 However, while Claybook seems like a tranquil puzzle game but it is more difficult than it looks. I struggled with understanding the mechanics of the game and had to play with the camera and control sensitivity quite a bit. The camera is extremely hard to control and actually forced me to put the game down because it made me ill.

For clarity, I have vestibular migraines, a migraine that can include a number of debilitating symptoms affecting the ears, vision, and balance, so I am prone to dizziness but traditionally I do not get motion sick from games. I played Far Cry 5 without issue and am able to play Dishonored few at least a few hours without getting a headache. However, this game made me sicker than I have ever gotten from a video game.

I put Claybook down after the second level because I became dizzy and nauseous from the camera angles. I did pick it up again a few hours later once the feeling passed but I still fell ill after playing it despite understanding the controls better. The movements feel oversensitive and this only worsened my motion sickness.

I think the game is very calming in nature and could be a great find for people and children who enjoy puzzle games that are not prone to motion sickness. Claybook is currently available on Steam, Xbox One, and PlayStation 4 for $14.99.