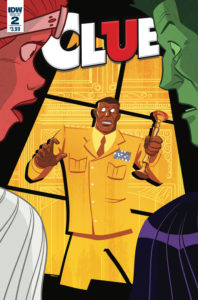 Another issue and another murder! And we are no closer to finding out who the killer (or killers?) is/are. Normally I am pretty good at who-done-its, but Paul Allor has a way of keeping things well hidden in these pages. Like I said about the last issue, I am keeping an eye on Green and Orchid, but that is not to say I think they have murder on the brain. I do have my thoughts about who is the killer, though. Of course, I am not going to discuss them in this review, we are all on this ride together. All I am going to say is that sometimes the mystery genre leans too heavy on particular characters to distract us from the real perpetrator.

A little background on me, Clue is one of my top 10, all time, favorite films. I will watch it any time it is 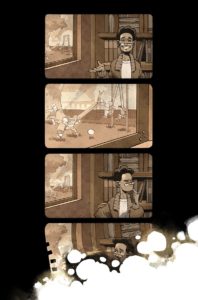 on no matter what part it is on. Just the other day I was talking with a co-worker about Tim Curry and of course, the movie came up. I then had to bring the conversation to this comic. IDW has always had a great way of bringing existing franchises to life anew. Even though there are dramatic differences between this and the film, if you are a fan of the latter, pick these issues up!

Even if you know nothing of the 1980s classic film or the game, you still need to see this comic. The artwork of Nelson Daniel is phenomenal. He uses a pop art feel that gives the pages age, while at the same time making them timeless. It is honestly hard to explain, you must experience it. I also recommend looking through it multiple times. At least once for the story and then other times for clues. I know Mr. Daniel is hiding something in there that I am just not seeing.