***SPOILERS AHEAD*** Watch your DVR before you read, Gotham Mid Season Finale review below will contain spoilers.

Monday’s Gotham brought us our last taste of our favorite Mad City until April…wait a minute…Mid Season Finale…didn’t Gotham just come back from a break? Why yes, yes it did, after the November 28th episode Gotham was absent until January 16th, then we had the 16th, 23rd, 30th, and now we’re on break until April 24th. No, I don’t understand it either, yes it runs the risk of hindering momentum brought on by the successful arcs that have been developed thus far this season. Yes, that is probably my biggest complaint with Gotham at this point, but this episode was pretty damn amazing so I’ll let it slide.

When we last saw our beloved Gotham City, crazy ole Jerome, resurrected by a group of crazy followers who I decided to dub the Ha Ha Henchmen, had taken his disciple Dwight and covered the face stealer in explosives blowing up him and consequently plunging Gotham into total darkness and chaos. Gordon and Bullock must now do everything in their power to track down Jerome, round up as many of the Ha Ha Henchmen as they can, all while trying to keep Gotham from literally burning to the ground as face painted crazies set fires everywhere they please. 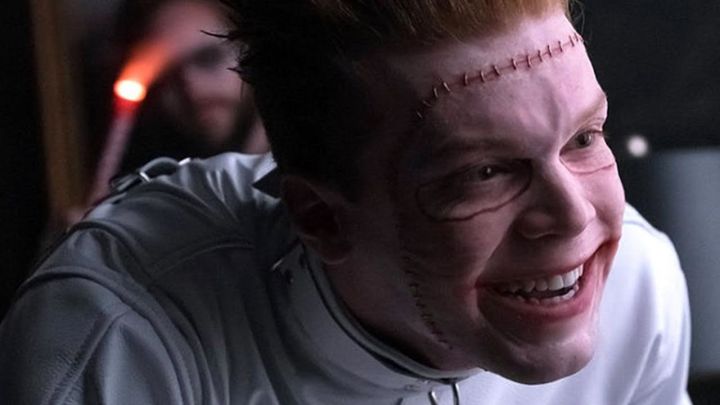 Meanwhile Cobblepot and two of his thugs arrive at a warehouse where Nygma’s ‘distress call’ came from in the previous week. Cobblepot finds Nygma safe, soon to discover, after Nygma kills off Oswald’s goons, that Nygma was never in danger, but rather drew him there to reveal he knew of Cobblepot’s involvement in Isabella’s death.

As Gordon finds out from Lee that Jerome was fixated on Bruce Wayne after he awoke from the dead since it was the last thing he remembered, Jerome and the Ha Ha’s, (sounds like a pop rock back) invade Wayne Manor, destroying the Owl statue Bruce still had in his possession. Jerome takes Bruce, sent off with a strong resonating bid of confidence from Alfred ‘this is what we’ve trained for’, and orders the Ha Ha’s to kill Alfred. Gordon arrives and he and Alfred kick some crazy henchman ass. I’m very glad they let Alfred show the military background and formidable hand to hand prowess that his backstory always alludes to, not only in training Bruce, but enabling him to put it into action as well.

Nygma gets Cobblepot to admit to having Isabella killed, also professing his love for him. I feel like the Oswald realizing he’s in love with Ed, but Ed is in love with Isabella, angle could’ve been more impactful to the schism between Penguin and Riddler, however it definitely seemed to take a back seat to Jerome’s resurrection and Gordon/Bullock attempting to save Gotham. Kind of a shame considering the powerful performances that not only Robin Lord Taylor and Cory Michael Smith bring to that storyline, but also the inclusion of Erin Richards, Drew Powell, and Jessica Lucas. Everyone did a great job, and the writing of that story, with Nygma’s cerebral assault on Cobblepot was incredible, it just happened to fall by the wayside to Jerome and his battles with Gordon and Wayne.

Ah the carnival, the boardwalk circus/carnival is where the excitement is. Jerome takes Bruce on a tour of modified carnival games where Gotham citizens are beaten and killed as part of the game much to the delight of the Ha Ha’s. Unsatisfied with Bruce’s Resting Bat Face, Jerome guts one of his followers in order to use his blood to draw a smile on Wayne’s face, borrowing an incredibly disturbing image from Killing Joke and adapting it to Gotham wonderfully. This is one of the best shot images in the show, yes probably because it resonates so heavily with the comic readers, but this just was done so well. 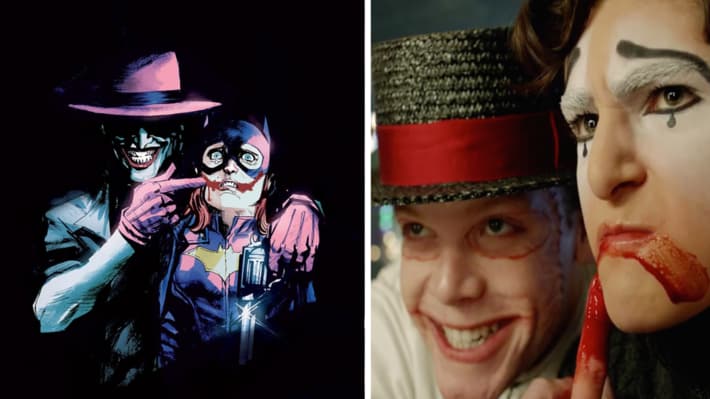 After shoving Jerome to prevent…well postpone, his killing of another civilian, Jerome is forced to add more staples to his face. After asking ‘does that hurt’ like the snarky teen he is, Jerome decides to show Bruce and begins stapling his arm. In a very Batman moment, Jerome doesn’t get screams of agony, but a stone faced stare back despite the pain. Excellent touch and great performing by David Mazous and Cameron Monaghan. As Gordon, Bullock, Alfred, and other GCPD officers arrive to mount an attack on the boardwalk circus, Jerome is handcuffing Wayne to a pole and loading a ‘boom’ canon with knives so that Bruce can go out with a bang! In typical Batman fashion, Bruce manages to use the staples in his arm to pick the handcuffs and escape just as the canon goes off. 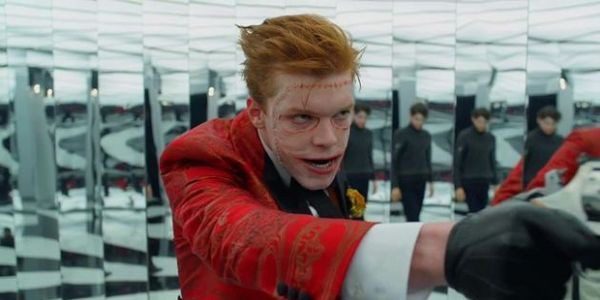 As Jerome follows Wayne into the house of mirrors we get this exquisite shot of Jerome surrounded by reflections of Bruce. As Jerome empties his bullets into the mirrors, Bruce attacks, gaining the upper hand and almost driving a shard of glass down into Jerome but ultimately decides against it.

As Alfred and Bruce reunite outside, Gordon stops Jerome as he tries to attack again, ultimately punching his face off, this poor guy just can’t keep a hold on his face! Back in Wayne Manor Bruce recalls to Alfred that he chose not to kill, resulting in Alfred designating that as his first rule, having Bruce repeat ‘I won’t kill’, a wonderful scene building the crux of Batman’s moral code. 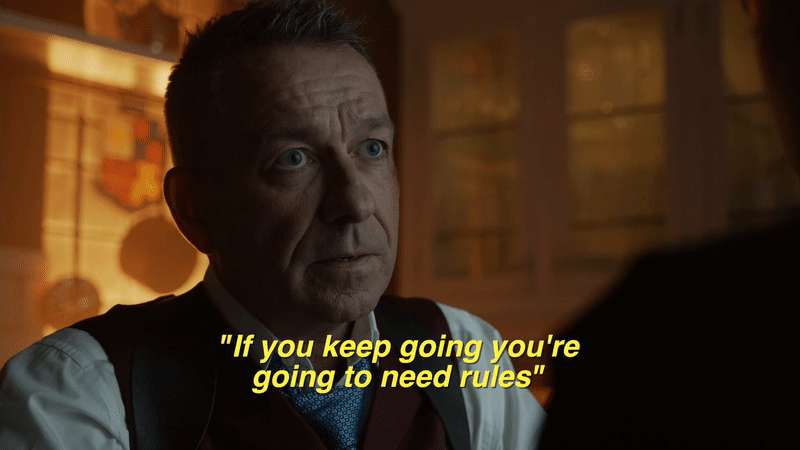 We also see Five, Bruce’s clone, now appearing brainwashed and working for the Court, as well as the man seen with Kathryn earlier on the other side of Gordon’s door where he is greeted as Uncle. The tail end of the episode also contains Nygma taking Oswald to the harbor, Cobblepot professes his love to Nygma, also stating that he made him, all for not as Nygma puts a bullet in his stomach and drops him into the harbor. This harbor might as well be the Lazarus Pit because everyone who is thought to die near that thing always comes back a few episodes later. The exciting part comes for the preview for the Mid Season premiere in April, which amongst other things shows us an awesome shot of Nygma in his bright green Riddler suit!! 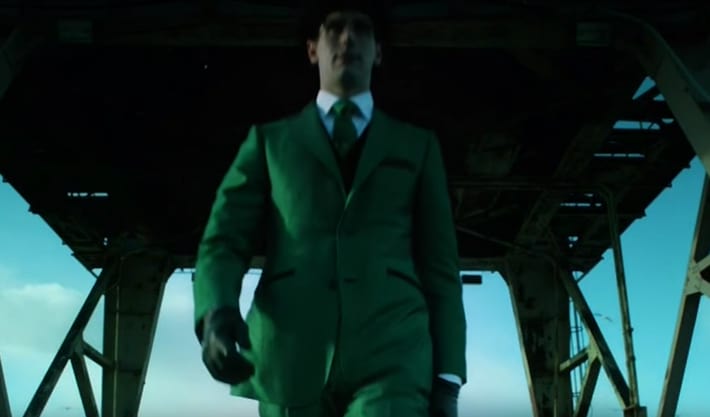 It’s excellent to see Gotham get back into Bruce’s journey to Batman, its been happening very, very slowly, and seeing his detective skills and iron resolve forming are great, but what we really want to see is Bruce get his Ninja Beat Down skills in higher order. It’s neat to note that David Mazouz has posted clips on Instagram of him training in Krav Mag and various other fighting styles in real life, bravo for the art imitates life process David! Overall the episode was very strong, lots of powerful comic reference imagery, masterful performances by Cameron Monaghan, David Mazouz, Robin Lord Taylor, and Cory Michael Smith, really bringing their characters to another level. Cobblepot has kind of trailed off after he realized he was in love with Nygma, but I feel like his inevitable return from his watery tomb will bring us even more of he Penguin we’ve grown to love from him.

Mazouz is becoming more and more of Bruce Wayne, its still hard looking at him as Batman as he still reverts to his age showing, but you can see the transformation occurring, and Monaghan’s Jerome is the perfect foil for Mazouz’s Wayne, both of them perform so well, and when their actions are impacting the other’s, even when they’re not sharing the screen, they elevate each other to another level.

Nygma is continuing to transform, I love what Smith is doing with this character, he’s at a good spot now (the green suit teaser helped a lot) however I still love his ‘battling the inner demon’ moments where you could see him beginning to drift into insanity. His mirror conversations were Emmy worthy.

While she wasn’t in the episode, Camren Bicondova’s Selina Kyle has proven to be one of the most charismatic and intriguing characters of the season. Her relationship with Bruce has helped him develop some sense of street smarts, while he has softened her edges. The constant love/hate relationship does well to evolve beyond the typical teenage angst and is laying the groundwork for the unique relationship that Batman and Catwoman have in the future.

Ben McKenzie’s Gordon is still growing on me, I feel like for the amount of time they’ve spent on his character, he should feel more flushed out than he is now. My hope is that with his uncle being a member of the Court of Owls, that we’ll get some good flashbacks and help his character do some much needed emerging. Thus far, Donal Loggue’s Bullock has been more captivating and after one flashback episode with his old partner, has felt more fully formed than Jim-bo.

Gotham has had its ups and downs, however I feel like Season 3 has been a very strong showing thus far. As long as they can follow a thought out narrative, the show is going to continue to perform well, and with Batman’s rogue gallery, there will never be a shortage of characters to play with. Many criticize Gotham for its obvious artistic licensing with the chronology of the character and their respective origins. If we look at this from the Multiverse perspective, where this is Bruce Wayne’s story, but perhaps a version of Bruce Wayne and Gotham from Earth…we’ll say 472, then we can view it with fresh eyes and enjoy the take on things. While I wish Gotham’s Seasons wouldn’t present their episodes in such bizarre break formats, the show continues to perform well and peak my interest. I’m very excited to see Mazouz continue to find his inner Bat, what plans thee Court has for Gordon, and what tricks, or should I say Riddles, Smith’s Nygma has up his sleee.

Oh, and can Jerome get his poor face back please?

Until next time, keep it nerdy in this mad, mad city called Gotham!